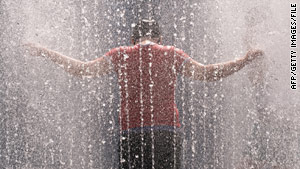 When temperatures reach into the 90s, a cool shower can offer more help than a fan, a beat-the-heat website says.
STORY HIGHLIGHTS

For more on the heat, go to CNN affiliates KSHB and KXAN

(CNN) -- The number of suspected heat-related deaths reported by health officials across the South and Midwest in the past week reached at least nine Wednesday as temperatures continued to hit triple digits.

In Tennessee, Shelby County Medical Examiner Karen E. Chancellor said a 77-year-old man was found dead Tuesday evening in his Memphis home. His death resulted from natural causes, but heat was ruled to be a contributing factor.

In Bartlett, Tennessee, a 67-year-old man collapsed in his yard Friday while mowing the lawn, Chancellor said. He died from chronic illnesses but heat exposure was ruled to be a contributing factor.

In Mississippi, a 48-year-old Gulfport man died of heat exposure Monday, according to the county coroner.

The man was working on road construction and "had cramped in the upper extremities," said Jackson County, Mississippi, Coroner Vicki Broadus. "It was his first day on the job as a concrete smoother."

Video: It's so hot, the leaves are changing

Video: Could the lights go out?
RELATED TOPICS

The Alabama Department of Health said one man died of heat exposure last week. No other information was available.

The National Weather Service said heat advisories and excessive heat warnings are in effect from the southern and central plains through the lower Mississippi and Tennessee river valleys.

The heat index -- what the temperature feels like when combined with the humidity -- is soaring across much of the South. CNN meteorologist Sean Morris said that at 10 a.m. Wednesday the index in Memphis, Tennessee, was at 108 degrees; Little Rock, Arkansas, was at 106; and Jackson, Mississippi, was at 104.

Those at greater risk of heat-related illness include infants and young children, people 65 or older and those who are already ill, especially with heart disease or high blood pressure.

Some helpful tips for cooling off from the Jackson County, Missouri, government website:

-- Schedule outdoor activities before noon or in the evening.

-- When temperatures reach into the 90s, a cool shower can offer more help than a fan.

-- If you must work in the heat, monitor the condition of co-workers and ask them to do the same for you.