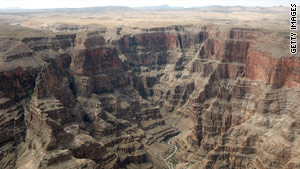 Witnesses reported that the 18-year-old was taking photographs when he slipped and fell over the edge, the National Park Service said in a statement.

He was being treated for neck, wrist and ankle injuries, the park service said.

Park rangers rappelled into the canyon to assess the teen's injuries before a park helicopter airlifted him out.