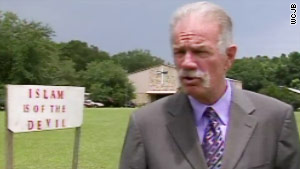 (CNN) -- An armed Christian organization, Right Wing Extreme, will protect a church that is planning to host an "International Burn a Quran Day" on September 11, the church's pastor said Tuesday.

The Dove World Outreach Center in Gainesville, Florida, says it is hosting the event to remember 9/11 victims and to take a stand against Islam. With promotions on its website and Facebook page, the nondenominational church invites Christians to burn the Muslim holy book.

Dove's Facebook page, set up for the September event, has nearly 6,000 fans. The initiative has also drawn critics.

Dove World Outreach Center Pastor Terry Jones has accepted the support of Right Wing Extreme, which he said offered to come to the church with between 500 and 2,000 men on September 11. He described the organization as an armed civilian militia group.

"There is a need for this protection. It is absolutely necessary in light of the death and terror threats we have received," Jones said in an e-mail to CNN.

"We have met with the FBI who have warned us of the threats they have seen, not only against us but against other targets in Florida. We have personally received threats by phone and many by mail," he said.

No one from Right Wing Extreme was immediately available to comment on Tuesday.

Muslims and many other Christians, including some evangelicals, are fighting the church's plan to burn the Quran.

Religious leaders in Gainesville have planned an event billed as a "Gathering for Peace, Understanding and Hope" on September 10, in response to the church's proposal.

The Islamic advocacy group Council on American-Islamic Relations has called on Muslims and others to host "Share the Quran" dinners to educate the public. In a statement, the group said it would give out 100,000 copies of the Quran to local, state and national leaders.

Separately, Jones has proposed a meeting with Abdul Rauf, the imam at the center of the controversial proposal to build a mosque and Islamic center near New York's ground zero.

The meeting would be meant to negotiate a "peaceful resolution," said a statement from Dove World Outreach Center on Tuesday.