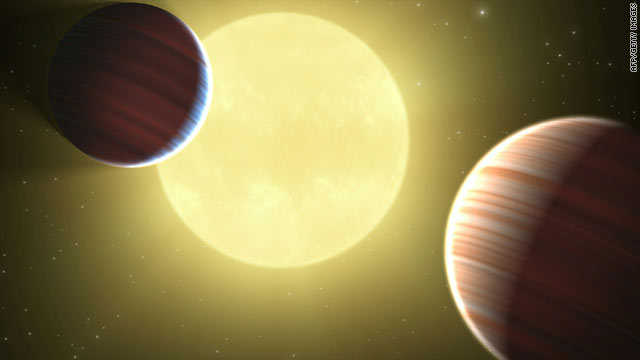 Miami, Florida (CNN) -- Two planets slightly smaller than Saturn have been discovered orbiting a distant star, a first for NASA's Kepler space telescope, whose mission is to look for signs of planets passing in front of stars, the space agency said Thursday.

This is "the first discovery of multiple planets orbiting the same star" by looking for such transits, said William Borucki, the science principal investigator for the Kepler Mission. He spoke in a teleconference from the NASA Ames Research Center in California.

The sun-like star, designated Kepler-9, is about 2,000 light years away in the constellation Lyra, he said.

The two planets, named Kepler-9b and 9c, show a clear gravitational interaction, according to NASA. But while scientists hope Kepler will find Earth-like planets, these two do not qualify. In addition to being much larger than Earth, they are much too close to the star they are orbiting.

"The habitable zone is actually quite far out from these stars," Borucki said. These planets "are very, very hot."

Scientists also have identified what appears to be a third, smaller celestial body orbiting the star. It's about 1.5 times the size of Earth, but it has not yet been confirmed as a planet, according to mission scientists. It also is very close to the star, with an orbit of about 1.6 days, NASA said.

The Kepler space telescope launched from Cape Canaveral in March 2009 with the mission of staring at our region of the Milky Way galaxy to search for Earth-size planets that would be in a star's habitable zone.

The habitable zone is actually quite far out from these stars
--William Borucki, science principal investigator, Kepler Mission
RELATED TOPICS

It is looking at more than 100,000 stars, watching for tiny repeated dips or fluctuations in their brightness. That momentary dimming, scientists say, could indicate a planet has come between the star and the telescope.

Kepler, currently 18 million miles from Earth, will continue its mission for another three and a half years.

In June, NASA announced that the space observatory had identified more than 700 planet candidates in just its first 43 days of searching, including five that could have more than one transiting planet.

"This is like opening a treasure chest," said Matthew Holman of the Harvard-Smithsonian Center for Astrophysics in Cambridge, Massachusetts.

And scientists say more discoveries are on the way as Kepler and other missions peer into the depths of the Milky Way.

"We want to know, in particular, what [the planets'] atmospheres are like," Borucki said. "Kepler can't tell us that, but missions are on the planning board that may answer those questions, which will help man understand the universe and his place in it."