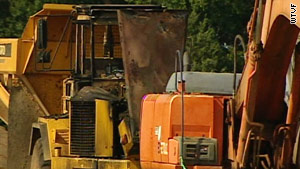 (CNN) -- Suspected arson at the future site of a mosque in Murfreesboro, Tennessee, has "really raised the fear factor" among area Muslims, a representative of the mosque told CNN on Monday.

The Saturday morning blaze destroyed an earth mover and damaged three other vehicles at the future site of the Islamic Center of Murfreesboro, said Camie Ayash, a spokeswoman for the center. The fire is under investigation, but "you can reasonably make the assumption" that it was deliberately set, FBI Assistant Special Agent Keith Moses said Sunday.

"The evidence is being analyzed to see what the origin of the fire was," said Moses, with the FBI's Nashville, Tennessee, bureau. "We have to follow the facts."

Ayash told CNN's "American Morning" on Monday the incident has provoked mixed reactions in the community, but "has really raised the fear factor for everyone. ... We see the different type of fear with our children. It is very hard to explain to children what is going on. It is hard to explain to the little kids when they ask you, 'Mommy, are these people for us or against us?' "

A candlelight vigil, organized by Middle Tennesseans for Religious Freedom in response to the alleged arson, was held Monday night in front of the Rutherford County Courthouse.

He said a truck with three or four men drove up bearing a sign that said "no mosque." Joined by three or four other mosque opponents, the men debated with some of those at the vigil for about an hour, Evans said.

Although voices were raised and there was some shouting, police did not interfere.

"We did not step in," said Evans. "It was peaceful." He added officers would have intervened if there were threats or physical altercations.

The blaze is being investigated by the FBI, the Bureau of Alcohol, Tobacco, Firearms and Explosives, and the Rutherford County Sheriff's Office.

ATF spokesman Eric Kehn told CNN on Monday night the investigation is continuing. "We have no reason to think it's a hate crime," he said.

"We simply cannot allow the actions of a few destructive individuals to go overlooked by Rutherford County residents. It's truly a shame that we have reached this point, but it is up to us to ensure the intimidation goes no further," said Claire Rogers, spokesperson for Middle Tennesseans for Religious Freedom.

Ayash said the Murfreesboro Fire Department told her the vehicles had been doused with an accelerant -- a substance, such as gasoline, that can help start or spread fires.

She told CNN on Monday that she was notified of the fire about 4 or 4:30 a.m. Saturday. A passerby had seen the fire about 1:30 a.m. and called the fire department, she said.

The lead detective told her that someone had opened the hood on the earth mover and set its engine on fire, she said. The other vehicles were doused with flammable liquid but not ignited. The detective speculated that the passerby might have spooked the arsonist, who fled, Ayash said.

"It really put fear into the community," Ayash said.

"Now someone had so much hatred to rip the joy out of their hearts," she said.

The Islamic Center of Murfreesboro has existed in the Murfreesboro area for more than a decade, according to its website, and currently meets about a mile from the site of the future mosque.

"We have had members in our community in this area for around 30 years," Ayash said Monday. "So all of this really took us by surprise."

The congregation purchased a 15-acre plot in 2009 and announced plans for a center that will include a mosque, educational facilities, a gym, cemetery and various recreational areas, including tracks, pavilions and a playground.

The project has provoked controversy in Murfreesboro, about 35 miles southeast of Nashville, and statewide.

In July, several hundred opponents of the mosque staged a march against the project. Some objected to Islam itself, carrying signs like "MOSQUE LEADERS SUPPORT KILLING CONVERTS," while others opposed the project for environmental reasons.

Last month, Tennessee Lt. Gov. Ron Ramsey publicly criticized the project. "You could even argue whether being a Muslim is actually a religion, or is it a nationality, way of life, a cult, whatever you want to call it," Ramsey, then a candidate for Tennessee governor, said at a rally.

"I think a lot of this has to do with timing," said Ayash, who said her husband is a Muslim and she converted about 10 years ago. "This was an election year. You had a lot of candidates running their campaign off of terrorism or things like that, so I think it had to do with timing and misinformation."

The community has an open-door policy, she said, and welcomes the opportunity to answer questions posed by members of the public about Islam.