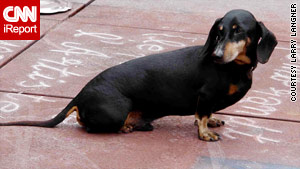 The company says it hasn't received any reports of animals becoming ill as a result of contact with the treats.
STORY HIGHLIGHTS
RELATED TOPICS

(CNN) -- A leading pet product company has issued a voluntary recall of nearly 75,000 bags of dog treats due to salmonella concerns, according to the U.S. Food and Drug Administration.

The move by Hartz Mountain Corp. came after random sample testing by the FDA indicated the presence of salmonella organisms in one or more 8-ounce bags of Hartz Naturals Real Beef Treats for Dogs.

The company, based in Secaucus, New Jersey, has not received any reports of animals or people becoming ill as a result of contact with the treats, and is investigating the source of the potential contamination.

The potentially affected treats are stamped with the lot code BZ0969101E, according to the FDA.

Hartz is urging dog owners who have purchased the recalled treats to immediately throw them away.

The FDA advises dog owners whose pets are exhibiting such symptoms as fever, diarrhea, abdominal pain and nausea to seek immediate veterinary assistance.

Consumers with questions regarding the recall should contact Hartz at 1-800-275-1414.