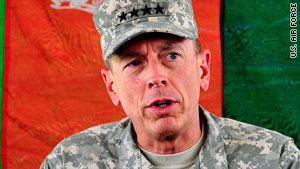 (CNN) -- The U.S. commander in Afghanistan on Monday criticized a Florida church's plan to burn copies of the Quran on September 11, warning the demonstration "could cause significant problems" for American troops overseas.

The Dove World Outreach Center in Gainesville, Florida, plans to mark the anniversary of al Qaeda's September 11, 2001, attacks on New York and Washington by burning copies of the Muslim holy book. The church insists the event is "neither an act of love nor of hate," but a warning against what it calls the threats posed by Islam.

The event has drawn criticism from Muslims in the United States and overseas, with thousands of Indonesians gathering outside the U.S. Embassy in Jakarta, Indonesia, on Sunday to protest the planned Quran burning.

And one of his deputies, Lt. Gen. William Caldwell, told CNN's "The Situation Room" that event "has already stirred up a lot of discussion and concern" among Afghans.

In a statement on its website, the Dove World Outreach Center said it plans to burn Qurans "to warn about the teaching and ideology of Islam, which we do hate as it is hateful." Its pastor, Terry Jones, has written a book entitled "Islam is of the Devil," and the church sells coffee mugs and shirts featuring the phrase. But the church says its animus is not aimed at individual Muslims.

"We love, as God loves, all the people in the world and we want them to come to a knowledge of the truth," it states.

Jones canceled a planned appearance on CNN's "Rick's List" to discuss the controversy Monday afternoon. Plemon el-Amin, the imam of an Atlanta, Georgia, mosque, said that Jones' criticism of Islam is "really quite uninformed."

El-Amin said Jones has boasted of never reading the Quran, so "He doesn't know that he's going to burn a book that has some of the most beautiful passages about Christ Jesus throughout, as well as Moses, Abraham and all of the prophets he reads about and says he follows in the Bible." But he said the best strategy would be to ignore Jones, "like we do people on corners saying the end of the world is coming."

Other religious organizations have joined with U.S. Muslim groups to oppose the Quran-burning. The National Association of Evangelicals is urging the church to cancel the event, warning it could cause worldwide tension between the two religions, and Christian, Muslim, Jewish and Hindu leaders in Gainesville have organized a "Gathering for Peace, Understanding and Hope" the night before the scheduled Quran burning.

In addition, an armed Christian organization that had pledged to protect the Dove World Outreach Center withdrew its support from the Quran-burning last week, stating the event "may diminish the work of the Holy Spirit to witness to Muslims."

That group's founder, Shannon Carson, said he agrees with the church's stance on Islam, which he called a cult "that is invading our nation." But he complained that the "liberal media" is using stories on Jones's plans "to distract, divide and enrage the public."