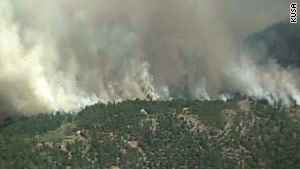 At least one home was destroyed in the 300-acre blaze in Woodward County, Oklahoma, where emergency officials have been responding to as many as five wildfires in the area since Sunday evening, when 40-mph winds began whipping through the region, said Matt Lehenbauer, director of emergency management for the county.

At least one firefighter suffered heat exhaustion, Lehenbauer said. No other injuries were reported.

Authorities believe embers from a campfire sparked the blaze. About 30 homes and 120 campsites were evacuated as a result of the fire. Firefighters were also working a 1,200-acre blaze on the east side of the county, believed started by arcing utility lines, Lehenbauer said.

The winds initially grounded air tankers, making containing the blaze more difficult, he said. Later in the day, three were able to fly.

About 1,000 homes were evacuated Monday, he said, and confirmed that structures have been lost to the fire, though he did not know how many. No injuries were reported.

The fire was moving northeast and causing nearby roads to be shutdown, Brough said, adding that officials were working to get firefighters into the area to contain the blaze.

About 100 firefighters were actively fighting the flames with an additional 75 in a staging area.

Firefighters are working in a "very rugged, steep area" that's difficult to access, contributing to the challenge, said Brough. He added it could take several days before the fire there is contained.

CNN's Dave Alsup and Erica Henry contributed to this report.