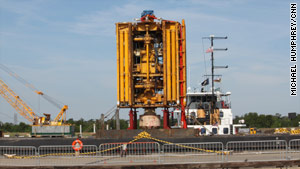 (CNN) -- BP said it resumed drilling Monday on a relief well, as efforts to permanently seal the previously leaking Gulf of Mexico oil well appeared to be entering their final stages.

Drilling on the relief well resumed at 2:40 p.m. ET after a massive sleeve protecting the well from sudden, large increases in pressure was successfully installed over the weekend.

Installing the device "resulted in the necessary conditions to commence the finalization of the relief well," Thad Allen, the government's appointed national incident commander in charge of overseeing the oil spill response, said in a statement Monday.

Allen said the relief well remains "the final step that will ensure the well is fully and finally killed."

Drilling had been stopped since August 10 when a tropical storm threatened conditions at the site, forcing the oil company to suspend operations. Since then, weather delays in the storm-prone Gulf as well as scientific and technical debate on how to proceed have extensively prolonged the timeline for definitively plugging the well.

Before drilling resumed, the relief well had been at a measured depth of 17,909 feet and was less than 50 feet vertically and four feet horizontally from the original well.

"Relief well operations will consist of drilling and ranging runs that will guide the rig's drill bit to intercept the well's annulus. Following the intercept, heavy drilling mud and cement will be pumped into the annular space to complete the isolation of the MC252 well," BP said.

While BP successfully stopped the flow of oil on July 15 by embedding a cement plug near the top of the well, permanently sealing the well has been a process full of fits and starts.

Just last week, Allen laid out a possible timetable that pushed the "bottom kill" -- a process in which heavy mud and cement are pumped into the bottom part of the original well via the relief well -- into October.

But with the new sleeve in place, the timetable is expected to be shortened "significantly," Allen. It could take about four days to finish drilling and intercept the original well. BP would then need a few more days after that to complete the bottom kill.

Federal investigators and the Department of Justice are now poring over a device called a blowout preventer, a piece of equipment that failed on April 20 when BP's oil platform exploded, killing 11 people. The blowout preventer was designed to stop oil from spewing by sealing the well pipe. Instead, it failed, triggering the world's largest accidental oil spill and sending 4.1 million barrels of oil into the Gulf.