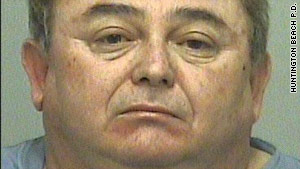 Attorney General Edmund G. Brown Jr. of California filed the suit "to recover the excess salaries" that officials from the city of Bell awarded themselves. He is also pursuing a reduction of their pension benefits.

"This is a very serious matter when public officials breach their duty to the public and enrich themselves with enormous obscene salaries which then trigger pensions of similar magnitude," Brown said.

"These officials must be forced to give up their ill-gotten gains, and we must enact strict reforms to prevent these kinds of abuses in the future."

The suit charges include fraud, civil conspiracy, waste of public funds, and breach of fiduciary duty. It also alleges that the defendants deliberately misled the citizenry about the accurate amount of their compensation. Brown said his lawsuit is separate from a criminal investigation.

The suit is demanding that the people return all excessive compensation and it is asking the court to set "appropriate salary levels for pension purposes."

Rizzo's attorney said he hadn't seen the allegations, but contends he was neither surprised by the lawsuit nor action taken by Brown, who he noted is running for governor.

Rizzo's salary was approved by the city council, said Jim Spertus. "There's nothing wrong there."

His client would have retired before, but the city wanted him to stay on, said Spertus, adding that Rizzo simply was paid through negotiations similar to the private workplace. The budgets were submitted for public review, he said.

"It's a misguided effort to assign blame in the wrong place," the lawyer said. "Mr. Rizzo is not at fault for the problems of Bell."

Brown said he plans to widen a statewide probe of public salaries and benefits, and he called for legislative reforms of salary and pension practice.

He is serving a subpoena on the city of Vernon, which is near Bell, "to obtain compensation records for city officials and employees."

"News articles have reported that one city official there received an annual salary of $785,000, and another received compensation totaling $1.6 million in a single year. Vernon, an industrial city near Bell, has a population of less than 100," the attorney general's office said.