Industry experts: Less 'made in USA' puts security at risk 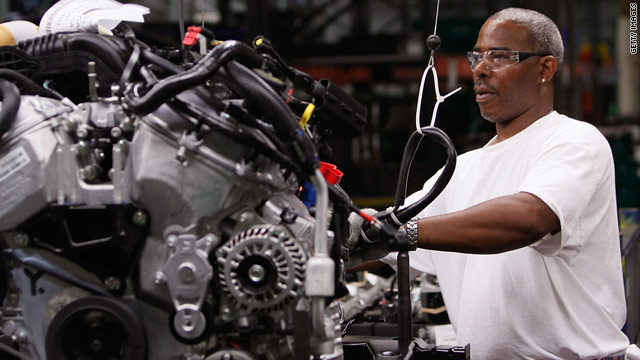 U.S. output compared with maximum potential production has been rising steadily since June 2009, but is still below average.
STORY HIGHLIGHTS

Washington (CNN) -- The decline in American manufacturing is risking the country's security, experts will tell a congressional hearing on Wednesday.

Manufacturing industry experts will appear at a National Security Oversight Subcommittee on Capitol Hill tomorrow to examine the effects the decades-old downturn in U.S. manufacturing may have on the country's national security.

The committee also will examine the problem of reliance on substandard and sometimes counterfeit foreign-made parts, a dependence stemming from the drop in U.S.-made products, a depleted manufacturing workforce, and outdated technology. That reliance could place the lives of American soldiers at risk, according to information released by the subcommittee.

"We have allowed our industrial base to deteriorate for the last two to three decades. As a result, just in national defense terms, our supply lines for strategic parts and materials have been stretched around the world," said Jeff Faux, founding president and distinguished fellow of the Economic Policy Institute.

"As you watch globalization move the manufacturing base offshore, in essence you are moving the defense base offshore," said Robert Baugh, executive director of the AFL-CIO, "This is dangerous".

Both Faux and Baugh will testify Wednesday.

The nation's manufacturers are being seduced by China where they can get more for their money due to an undervaluation of their currency, illegal subsidies, and a lack of enforceable laws regarding, worker rights, and environmental and health standards, Baugh told CNN.

As you watch globalization move the manufacturing base offshore, in essence you are moving the defense base offshore.
--Robert Baugh, AFL-CIO executive director
RELATED TOPICS

China's manufacturing sector is on the brink of passing that of the United States, according to a report released in June by the economic research firm IHS Global Insight. The value of goods produced by China's factories reached about $1.6 trillion last year, compared to $1.7 trillion by U.S. manufacturers.

The nation's capacity utilization, which compares the output of U.S. factories to their maximum potential production, fell to a record low of 68.2 percent in June of 2009, as Chrysler and GM plants essentially shut down due to the bankruptcy process at the two companies, and as other automakers and suppliers scaled back due to overall weakness in demand.

U.S. output has been increasing steadily every month since that reading, rising to 74.7 percent in August -- the latest month for which data is available -- but is still down from the average reading, which is about 81 percent.

The subcommittee will be looking to hear recommendations from the panel of experts to open up discussions with officials responsible for making manufacturing sector policies.

"It is critical that we focus on modernizing and improving our industrial base to improve our economy, provide better employment opportunities to Americans, and strengthen national security," said Rep. John Tierney, D-Massachusetts, chairman of the subcommittee. "We have to start to think strategically about the industrial challenges we face and take aggressive action to fully address them."