Gates lifts veil on retirement, but date is an open question 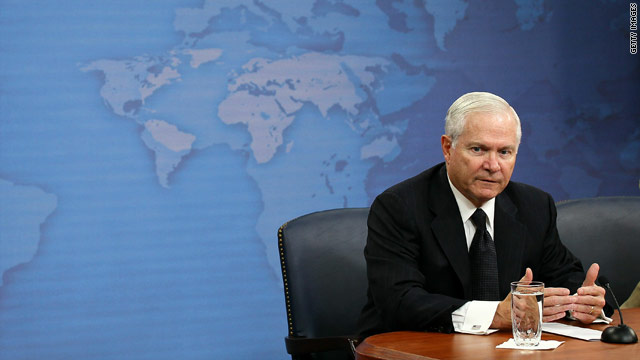 One disincentive to staying past 2011, Gates said, would be the likelihood of a successor's election-year confirmation process.
STORY HIGHLIGHTS

(CNN) -- He wants to leave next year. That much he has said. But former spy chief and current Defense Secretary Robert Gates has been coy about the "when."

But on Thursday, he left a few clues and lines to read between.

Gates spoke at a Pentagon news conference and was asked about a comment he made to Foreign Policy magazine that the best time for him to leave his job would be 2011.

Gates told reporters that the reasoning for 2011 was all about the politics. He said President Obama would have a much harder time finding a replacement with only one year left in his term. He said it would be a "difficult challenge."

"It also seemed to me that having a confirmation process in the early spring of 2012, in the middle of a presidential election year, is probably not the wisest thing either. So that was my rationale," Gates explained.

Asked whether he would want to just stay until the end of Obama's first term, Gates was pretty clearly against it.

"Not in my thinking," he said.

But a 2011 departure raises the issue of timing. The president has said he wants to begin drawing down some of the 30,000 troops just added to the Afghanistan war in July 2011. So would Gates stay to help make the decision if such a drawdown is possible?

He'd rather not say, but he has decided.

Of course, Gates has wanted to leave before and been quite vocal about it in the hopes that he wouldn't be asked to stay. The strategy didn't work last time. He said he didn't want to stay past former President George W. Bush's term. But Obama asked him to stay on, and he did.