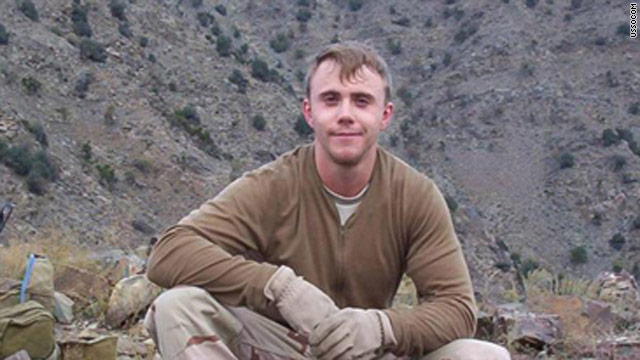 The citation read at a solemn White House ceremony in Washington, D.C., honored Miller for "conspicuous gallantry ... at risk of life above and beyond the call of duty" and "extraordinary acts of heroism" on January 25, 2008, when a patrol he led was ambushed in Afghanistan.

Miller killed at least 10 insurgents and wounded dozens more in repeatedly exposing himself to enemy fire "in keeping with the highest traditions of military service," the citation said.

Miller is the seventh service member to receive the Medal of Honor for actions during operations in Iraq and Afghanistan.

Obama gave a detailed account of the combat in which Miller was killed, describing how the small group of U.S. and Afghan soldiers came under fire in a narrow valley from protected enemy positions above.

Realizing the peril of the situation, Miller ordered his team to fall back, but then "did something extraordinary," Obama said.

"Rob moved the other way, toward the insurgents," to draw their fire so his team could back off safely, the president said.

The others could hear Miller firing and calling out enemy positions amid overwhelming enemy fire, Obama said.

Five members of his team were wounded, Obama said, but all survived. He quoted one of the survivors as saying, "I would not be alive today if not for his ultimate sacrifice."

Some of the dozen team members at the ceremony were red-eyed when Obama asked them to stand, and the president cited them and all U.S. fighting forces in Afghanistan for their commitment to the mission of preventing the country from again becoming a haven for terrorists to launch attacks on the United States.

"Every American is safer because of their service, and every American has a duty to remember and honor their sacrifice," Obama said.

Miller's parents, Maureen and Philip Miller, stood onstage with Obama as the citation was read. They earlier told how they take consolation that their son gave his life so others could live.

"If it wasn't for Robert's actions, they could have easily been killed," Maureen Miller said.

Miller's father added: "We have a sense of awe and amazement of what he did and a feeling of pride."

Sgt. James Lodyga, Miller's commander in Afghanistan, described the battle in the village of Barikowt, near the Pakistani border, as being like "fish in a barrel."

"Only 24 years old, Miller impressed everyone on his team. Although the youngest member of A Company, 3rd Battalion, 3rd Special Forces Group [Airborne], Fort Bragg, N.C., he quickly earned a reputation for taking on difficult challenges," the Army said.

His mother relayed a perspective only a parent could have.

"I'm feeling humbled by it," Maureen Miller said. "He was just our kid, not too long out of the annoying teenager stage, and he was doing all this."

She had a notion, though, of her son's outlook on life.

"Robert wore his favorite shirt which said, 'Cowards die many time before their death. The valiant never taste of death but once,' " she said.

The fallen soldier's sister, Nancy, pointed out that "he was always concerned about looking out for others."

Lodyga said Miller did just that.

"Robby was shot in the side and he shot those who shot him," the sergeant said. "He kept firing until he succumbed to a shot under the armpit. I don't know how to put it into words. I know Robby saved our lives, Absolutely he's a hero. I thank him a lot."

The Medal of Honor is given for exceptional acts of gallantry, "bravery or self-sacrifice" and must involve risk of life, the White House said.

At Miller's home in Oviedo, Florida, his parents fly the U.S. flag -- and display two stars in a window.

"The blue star flag is anyone in active service. Gold star is designation that they are fallen in battle," Philip Miller said. "They are in memory of our son and a proud memorial for him."

For Miller's parents, Wednesday's ceremony at the White House was an important step on the long road to healing.

The parents were told at his funeral more than two years ago that the decorated Green Beret would be receiving another commendation.

"There was a sense that it wasn't finished and that there was something left to be done," Maureen Miller said. "Now this part of the chapter will be closed."

The slain warrior's mother said she was looking forward to "finally getting it over with and a sense of closure. We will always miss Rob and there will always be a hole in our heart."