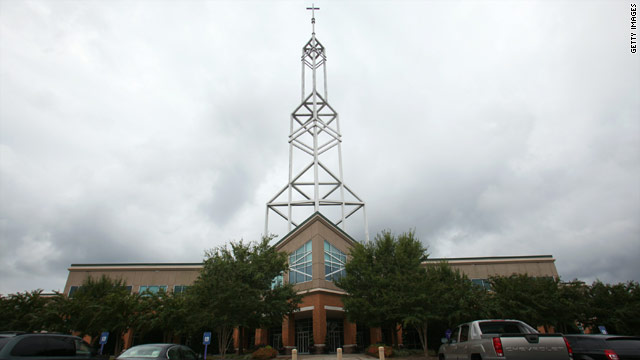 New Birth Missionary Baptist Church is the subject of a lawsuit by Tama Colson in the U.S. District Court of North Georgia.
STORY HIGHLIGHTS

Atlanta, Georgia (CNN) -- A former employee of New Birth Missionary Baptist Church has filed a lawsuit against the Atlanta megachurch, alleging its employees retaliated against her after she complained of sexual harassment.

The civil lawsuit, filed Wednesday on behalf of Tama Colson in the U.S. District Court of North Georgia, asks for unspecified damages.

Colson contends a male employee showed her a photo of a penis on a cell phone and that he and others later retaliated against her for complaining.

Her lawsuit claims the church is culpable for sexual harassment, retaliation, breach of fiduciary duty and infliction of emotional distress. The church's pastor, Bishop Eddie Long, is not named as a defendant.

"New Birth has a strict policy against sexual harassment that requires employees to report the complaint within 48 hours of the abuse," Long and church spokesman Art Franklin said in a statement late Thursday.

"Tama Colson's complaint allegedly happened in October of 2009," the statement said. "Although, Tama Colson was aware of the New Birth sexual harassment policy she did not make her complaint known to New Birth authorities until August of this year. New Birth moved swiftly to launch an investigation that is ongoing."

CNN has been unable to reach Colson or her attorneys for comment.

Four unrelated lawsuits accuse Long of using his power and influence within the 25,000-member New Birth Missionary Baptist Church to lure young male church members into sexual relationships. The church is a defendant in some of those lawsuits.

Colson, a member of the church, was hired in August 1998 as an audio engineer, the suit states. A supervisor in a separate department approached her in October 2009 and asked whether she wanted to see a picture on his cell phone. Having seen innocuous pictures on the man's phone before, Colson agreed, the lawsuit alleges. The official showed her a picture of a penis, the suit states.

Colson claims she talked with a security official at New Birth about the incident on the day it happened. The plaintiff said she was afraid to mention it to her direct supervisor because he and the man who showed her the photo "were part of Bishop Eddie Long's inner circle and were never disciplined for any wrongdoing."

Colson learned later her department would be merged with the department where the photo sharer worked. She complained to several church leaders, she contends. Afterward, the suit says, Colson was demoted and humiliated, and the man who showed her the photo began to torment and intimidate her.

Nearly a year after the initial incident, church elders and officials accused her of poor work performance and claimed she lied about her conversation with the security official, the suit states.

When church officials would not let her transfer to another department, she obtained a doctor's excuse from work because of a lupus condition. But, the suit says, a church official and attorney refused to accept the excuse and instead fired her.