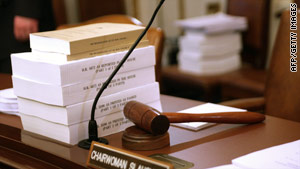 Florida and 19 other states have legally challenged the wide-ranging health care reform passed earlier this year.

(CNN) -- A federal judge in Florida on Thursday rejected a motion by the government to dismiss some counts of a multistate challenge to the sweeping health care reform signed into law by President Barack Obama earlier this year.

The ruling by Senior U.S. District Judge Roger Vinson means the lawsuit filed by attorneys general from Florida and 19 other states can proceed on questions of whether the health care law is constitutional in requiring citizens to obtain health care coverage or face financial penalties, as well as forcing states to expand Medicaid.

Vinson threw out four other counts of the lawsuit.

"At this stage of the case, the plaintiffs have most definitely stated a plausible claim," Vinson's ruling said of the challenge to whether the health coverage mandate is constitutional.

Florida Attorney General Bill McCollum, who filed the constitutional challenge, and officials from some of the other states that joined him applauded the judge's decision.

"It is the first step to having the individual mandate declared unconstitutional and upholding state sovereignty in our federal system," McCollum said in a statement.

The liberal Constitutional Accountability Center noted that Vinson dismissed four of the six counts in the lawsuit.

"We are happy that Judge Vinson narrowed this lawsuit today, but what he really should have done is dismiss it altogether," CAC President Doug Kendall said in a statement.

Last week, a federal judge in Michigan ruled in a similar lawsuit that the controversial penalty provision is constitutional.

The issue, which is also before a Virginia court, challenges the authority of Congress under the Commerce Clause to require the purchase of health insurance.

In the Michigan lawsuit, plaintiffs opposed to the Health Care Reform Act asked the court to declare the whole law -- or at least the penalty provision of it -- to be an unconstitutional tax.

Judge George Caram Steeh disagreed and rejected a motion for an injunction against the law, derisively labeled "Obamacare" by opponents.

"The decision whether to purchase insurance or to attempt to pay for health care out-of-pocket is plainly economic," the ruling said. "These decisions viewed in the aggregate have clear and direct impacts on health care providers, taxpayers and the insured population who ultimately pay for the care provided to those who go without insurance."

Legal experts say they expect the issues to ultimately end up before the U.S. Supreme Court.