Scientists: Tyrannosaurus rex munched on its own kind 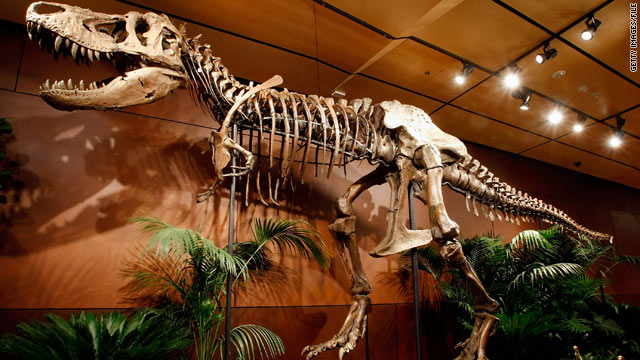 T. rex, known for "puncture and pull" feeding, left discernible marks in the bones of its prey.
STORY HIGHLIGHTS

(CNN) -- Add cannibalism to the fearsome attributes of Tyrannosaurus rex, the big-headed dinosaur that roamed North America 66 million years ago and took no prisoners.

A study released on the scientific website PLoS ONE suggests T. rex made the tooth marks on four specimens of Tyrannosaurus rex.

"If something is dead, it's lunch," said study co-author Gregory M. Erickson of Florida State University.

Erickson and three other researchers studied the four T. rex remains and those of 13 herbivores, all found in museum collections.

Neither Erickson, nor Nicholas R. Longrich, who led the team, know for sure whether the predator killed its brethren in combat and then ate, or whether they were scavenging, a popular activity of animals then and now. The latter seems the more likely scenario.

T. rex, known for "puncture and pull" feeding, left discernible marks in the bones of its prey. And, researchers said, no other carnivore living at that time could have left such bite marks in skeletons. They also determined the pattern and nature of the gouges left from bite marks indicated the attacker was likely feeding on a carcass.

Erickson said the finding adds another piece to the mysterious life of T. rex and said he hopes it will spur more research on the habits and behaviors of the beast.

"Piece by piece we can put it together," said Longrich, a Yale University paleontologist whose current research includes an ancestor of the three-horned Triceratops.

The study also points out that cannibalism is common in nature, especially among larger species such as bears, Komodo dragons and hyenas.

Immortalized in the popular culture and the movie "Jurassic Park," Tyrannosaurus rex is the poster child of prehistoric creatures.

The discovery of T. rex fossils has increased steadily in the past 10 years, Erickson said.