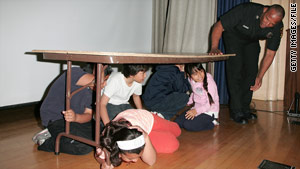 Los Angeles, California -- -- Millions of Californians participated in a drill Thursday at 10:21 a.m. PT for the dreaded "big one" -- a catastrophic earthquake.

The Great California ShakeOut was a practice run for Californians, who endure many minor earthquakes throughout the year but have always feared a cataclysmic one. Millions of people were instructed to "drop, cover and hold on" by the public address systems in offices and elsewhere.

After a minute, announcers on office address systems told workers: "The shaking is now over. You can stand up. Thanks for participating in the Great California ShakeOut."

About 7.1 million people were signed up for the second statewide drill, according to organizers. They plan to hold it annually.

"The purpose of the ShakeOut is to practice how to protect yourself during earthquakes so you will know how to react when the next earthquake strikes," organizers said in a statement.

"In addition, the ShakeOut drill encourages everyone to get prepared at work, school and home."

Organizers urged residents to ensure they are always prepared for the real quake by ensuring they have a family plan and emergency supplies.

It was sponsored by various state agencies, including the California Emergency Management Agency and the United States Geological Survey.