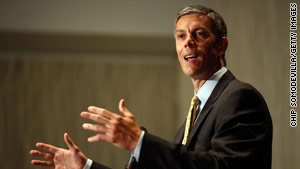 Washington (CNN) -- Bullying and harassment in schools often includes violations of federally protected civil rights, the federal government warned Tuesday in new guidelines for educators on how to address the problem.

If school administrators fail to properly deal with harassment based on gender, race or other issues, they risk being cited for contributing to a pattern of civil rights violations that could, in extreme cases, lead to a cut in federal funding, according to top officials who spoke to reporters on a conference call about the new guidelines.

"In extreme cases, schools could be stripped of their federal education monies if they don't comply with all of our civil rights laws," said Russlynn Ali, assistant secretary for civil rights. Also on the call were Arne Duncan, secretary of education, and White House Domestic Policy Council Director Melody Barnes.

The issue of harassment gained prominence this year after a spate of suicides by students who were being bullied. President Obama has called for greater awareness of the problem, saying the nation must "dispel the myth that bullying is just a normal rite of passage or an inevitable part of growing up."

The guidelines were part of a letter that began "Dear Colleague" sent Tuesday to thousands of schools, colleges, universities and school districts around the country that included examples of bullying and harassment cases that constituted violations of federal civil rights laws.

In addition, the government said the White House will host a conference next year on preventing bullying and harassment, building on efforts by Duncan's department and other agencies.

In August, the Obama administration hosted the first National Bullying Summit and launched a national campaign against bullying.

Ali said the government proposed $410 million in fiscal year 2011 spending for "successful, safe and healthy students," a 12 percent increase over 2010.

In a statement Tuesday, the American Civil Liberties Union welcomed the new government guidelines for making clear that most religious, gender and sexual harassment comes under federal civil rights prohibitions, but it called for expanding the federal law to eliminate any doubt.

"Though the guidance goes far under current law, it does not replace having a federal statute that explicitly protects" lesbian, gay, bisexual and transgender students, said Laura Murphy, the director of the ACLU's Washington legislative office.

Murphy called for Congress to pass the Student Non-Discrimination Act, a bill pending in the House and Senate that the ACLU said would guarantee that homosexual and transgender students are explicitly protected from harassment and discrimination under federal law.