2010's only US giant panda cub born in Atlanta zoo 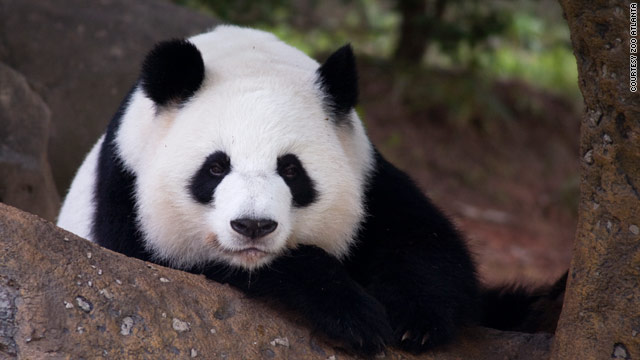 Atlanta, Georgia (CNN) -- A giant panda cub -- the only one this year in the United States -- was born early Wednesday at Zoo Atlanta, the zoo said in a statement.

Lun Lun, a 13-year-old female panda, gave birth to the cub at 5:39 a.m. ET in a specially prepared birthing den inside the zoo's giant panda building, according to the statement.

"Lun Lun appears to be providing appropriate care for her cub, which is roughly the size of a cell phone," the statement said. The facility's animal management and veterinary teams were monitoring the mother and cub round-the-clock, and "a preliminary veterinary checkup will be performed as soon as staff is able to remove the cub without disrupting maternal care."

The cub is the third for Lun Lun and mate Yang Yang. It will be introduced to the public in spring 2011, the zoo said. Yang Yang, 13, and the cub's older brother, Xi Lan, remain on exhibit and will not be introduced to the new addition. "The separation is normal for giant pandas, which are solitary in the wild," the statement said.

The couple's firstborn, Mei Lan, has lived at China's Chengdu Research Base of Giant Panda Breeding since February. She was born in September 2006. Xi Lan, born in August 2008, "remains one of the zoo's most popular and precocious animal stars" the statement said. All three births came about by artificial insemination. For the most recent cub, Lun Lun was artificially inseminated on June 13.

"We are extremely excited about welcoming Lun Lun's and Yang Yang's third cub, and proud of the success of Zoo Atlanta's giant panda program," said Dwight Lawson, the zoo's deputy director. "This is a joy we share with the city of Atlanta, our colleagues in China and our counterparts at fellow zoological organizations housing giant pandas in the U.S."

Zoo Atlanta called the birth "a significant achievement for global efforts to save a critically endangered species." Fewer than 1,600 giant pandas are estimated to remain in the wild, and about 280 reside in zoos -- 11 of them in the United States.

Before the cub makes its public debut, images will be available at the zoo's panda conservation center and on its "PandaCam," accessible online.

Lun Lun and Yang Yang were born in China. They have lived with each other since they were a year old and came as a pair to Zoo Atlanta in 1999.