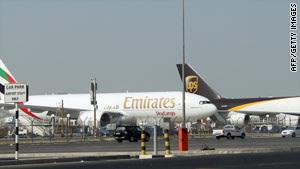 Airliners sit on the tarmac at Dubai airport after a parcel bomb was intercepted in Dubai originating in Yemen.
STORY HIGHLIGHTS
RELATED TOPICS

Washington (CNN) -- The United States received intelligence from Saudi Arabia early last month about a possible terror plot involving the use of at least one airplane, a U.S. counterterrorism official told CNN on Saturday.

The official confirmed that the intelligence indicated that one or two planes may be used simultaneously, and that the plot would unfold within a week or so.

The source was responding to a New York Times report Saturday that Saudi intelligence officials had tipped off the United States that al Qaeda's arm in Yemen -- known as al Qaeda in the Arabian Peninsula, or AQAP -- was planning a terror attack, "three weeks before a plot to send parcel bombs on cargo planes was foiled at the last minute."

The story, citing U.S. and European officials, said an October 9 warning was a "much more detailed" alert than an initial tip in July that warned of an attack against the United States or Europe.

However, the U.S. counterterrorism official told CNN that "The information we received in early October contained no mention of cargo planes, or the precise details of the plot -- to include what planes might be involved, where they might originate, or who the perpetrators might be," the official said. The source also wouldn't confirm the October 9 date.

"No one knew, for instance, that AQAP was specifically targeting planes departing Yemen. All of this was taken very seriously, and that's a key reason why everyone moved quickly when the Saudis contacted American officials last week."

Al Qaeda in the Arabian Peninsula claimed responsibility Friday for the plot -- which surfaced October 29 -- to send explosive devices on cargo planes bound for the United States. The group, which had been suspected in the plot, posted its claim on various radical Islamist websites, saying, "We will continue to strike blows against American interests and the interest of America's allies."

The statement also claimed the group is responsible for the crash of a UPS cargo plane in Dubai, United Arab Emirates, on September 3. American and UAE officials have said they have found no evidence that terrorism played a role in that incident.

The packages were discovered thanks to a tip from Saudi Arabia. Saudi officials provided tracking numbers of the two packages bound for Jewish organizations in the United States, enabling quick tracing to the United Kingdom and Dubai, a source told CNN earlier.

"This is how it's all supposed to work. The cargo plot represents a major counterterrorism success," the counterterrorism official said Saturday. "If anyone thinks the Saudis aren't serious about their counterterrorism partnership with the United States, recent events suggest they ought to think twice."

CIA spokesman George Little said Saturday, "Over the past several months, we received intelligence -- which was shared across our government -- from our foreign partners about threats from AQAP and other terrorist groups."

"Last week, we received specific intelligence that allowed the United States and our allies to disrupt the cargo plot. Our actions were swift and aggressive."

Friday's AQAP statement denounced the Saudi assistance in thwarting the plot, saying, "God has exposed you and showed the world that you are nothing but treacherous agents to the Jews because these bomb packages were headed to Jewish-Zionist temples, and you had to intervene with your treacherous ways to protect them, so may God curse you for being the oppressors."