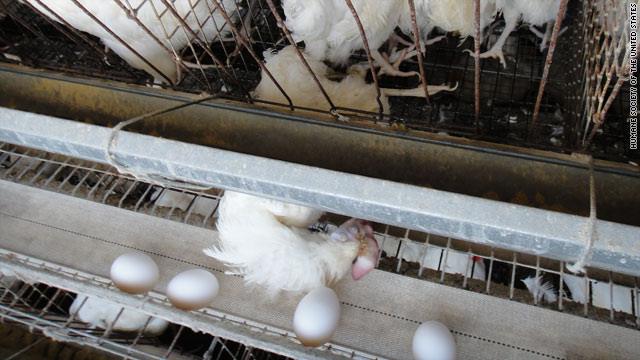 The Humane Society says its undercover video shows a dead bird as eggs roll by inches away on a conveyer belt.
STORY HIGHLIGHTS

Washington (CNN) -- A group that protects the welfare of animals has released an undercover video it claims shows animal abuse at a Texas farm operated by the largest egg producer in the United States.

The Humane Society of the United States says one of its investigators worked at the Cal-Maine farm in Waelder, Texas, for almost a month this fall and documented multiple abuses and food-safety violations.

The video shows dead birds, birds stuck in their cages, overcrowding and what appears to be hens covered in feces. At one point the video shows a dead bird as eggs roll by just inches away on a conveyor belt.

The short, edited video was shown at a news conference on Wednesday by the Humane Society's president and CEO, Wayne Pacelle. "Our latest farm animal investigation documents inhumane treatment of laying hens and conditions that threaten food safety," Pacelle said from the group's headquarters in Washington.

Pacell told reporters that Cal-Maine, based in Jackson, Mississippi, was unaware of the investigation and that the video was being made public for the first time. Pacell said he didn't know if the giant egg company had seen the video.

'Farm had eggs on top of corpses'
RELATED TOPICS

Cal-Maine responded to the allegations with a statement on its website.

"Cal-Maine Foods has been a leader in accepting and implementing animal welfare measures. All of the Company's facilities are operated in full compliance with existing environmental, health and safety laws and regulations and permits. Each employee involved in the care and handling of our hens is required to review, sign and comply with our Company code of conduct regarding the ethical treatment of hens which requires employees to report any possible violations," the statement said.

The egg industry has taken a beating of late. Just this summer over half a billion eggs were recalled after a salmonella outbreak was traced to an Iowa farm.

Cal-Maine is no stranger to recalls. It recalled 288,000 eggs earlier this month when the U.S. Food and Drug Administration informed the company that eggs from one of its Ohio plants tested positive for Salmonella enteritidis. Salmonella, which is generally contracted from contaminated poultry, meat, eggs, or water, affects the intestinal tract.

According to the U.S. Department of Agriculture's Food Safety and Inspection Service, chickens can pass the bacteria to eggs because the eggs leave hens through the same passageway as feces. Alternatively, bacteria in the hen's ovary or oviduct can get to the egg before the shell forms around it, FSIS said.

Cal-Maine says it sold over 778 million eggs in 2009, which represents 18 percent of the United States market. According to the companies website, "Cal-Maine has an industry-leading record in food safety with all of its 35 processing plants independently verified as reaching the highest level of safety by the Safe Quality Food Institute."

Over 70 billion eggs are produced a year in the United States, and the Humane Society would like to see the large egg farms change their ways

"Time and again, we've found that these massive facilities caging hundreds of thousands of animals do not properly care for the birds ... It's time for the egg industry to embrace cage-free housing systems and move away from battery cage confinement methods," Pacelle said. Battery cage systems allow many birds to be housed in one facility but critics claim it's dangerous and cruel to the animals.

The Humane Society would like to see cage-free housing but so far only 5 percent of eggs produced in the U.S. use this method, according to Pacelle.

The U.S. Food and Drug Administration implemented new rules in July for large egg producers. These mandates include cleaning poultry houses that test positive for salmonella, rodent control, refrigeration of eggs during storage and transportation and buying chicks and young hens only from suppliers who monitor for Salmonella bacteria.

The USDA says that as many as 79,000 illnesses and 30 deaths due to consumption of eggs contaminated with the bacterium Salmonella enteritidis may be avoided each year with these new measures in place.