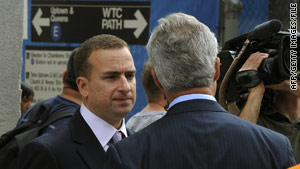 Sharif El-Gamal is interviewed near the site of a proposed Islamic community center in September.
STORY HIGHLIGHTS
RELATED TOPICS

New York (CNN) -- The developer behind the controversial Islamic community center and mosque planned for Lower Manhattan has requested federal funding through the Lower Manhattan Development Corporation to support the project known as Park51.

The funding would come from money the Department of Housing and Urban Development allocated to help rebuild the neighborhood after the 9/11 attacks.

"Park51 has applied for a Lower Manhattan Development Corporation grant," said Sharif El-Gamal, CEO of SOHO Properties, the developer behind the Islamic center. In a statement, El-Gamal said the money would "in part fund social service programs such as domestic violence programs, Arabic and other foreign language classes, programs and services for homeless veterans, two multi-cultural art exhibits and immigration services."

The Lower Manhattan Development Corporation received more than 265 applications seeking more than $175 million for community and cultural programs, though the LMDC has only $17 million of federal funding to allocate.

"We are now turning to the challenging but important task of sorting through the applications to identify those that address long-standing community and cultural needs," said Avi Schick, chairman of LMDC.

The grants will range from $100,000 to $1 million, according to Julie Menin, chair of Community Board 1 and a member of the LMDC board. Among the criteria used to judge applications, Menin said, are financial viability, job creation, revitalizing the community and a track record of service in Lower Manhattan.

An online report said Park51 had requested $5 million, but neither the developer nor LMDC board members would confirm that amount.

The LMDC plans to decide how to allocate the $17 million "towards the end of the first quarter of next year," said Menin.

Park51 has yet to raise significant funds for the community center located two blocks north of Ground Zero, a project that could cost $100-million.

"Park51 has not launched a formal fundraising program and is currently in the process of expanding its Board of Directors to plan, manage and oversee such efforts," said El-Gamal, adding that the project has not yet applied for federal tax-exempt status, but plans to do so "in the coming weeks."