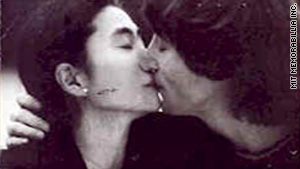 (CNN) -- An album that John Lennon autographed for his killer just hours before he was gunned down outside his New York City apartment building went on sale Monday for a whopping $850,000.

The copy of Lennon's iconic "Double Fantasy" album, released in 1980 and featuring the former Beatle and his wife, Yoko Ono, is being sold by an anonymous seller, according to New York autograph dealer Gary Zimet.

"Given the fact that it's unarguably the most important rock and roll artifact ever," Zimet said, the album is appropriately valued.

Zimet said that Michael submitted the album to police, who later returned it to him after an investigation into Lennon's death on December 8, 1980.

Nearly two decades later, Michael sold it to an anonymous buyer for $165,000, with Zimet as an intermediary, the autograph dealer told CNN. On Monday, that same anonymous buyer put the album up for sale at more than five times the amount the buyer paid for it.

Zimet said that the approaching 30th anniversary of Lennon's death, along with Chapman's recent denial of parole in September, has added to the notoriety of Lennon's murder and the value of the album.