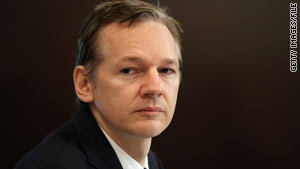 (CNN) -- The whistleblower organization WikiLeaks indicated Monday that it is preparing to release a new batch of previously classified U.S. military documents.

"Next release is 7x the size of the Iraq War Logs," the group stated via Twitter. "Intense pressure over it for months. Keep us strong."

Pentagon spokesman Col. Dave Lapan said last month that the Defense Department has been bracing for the release of more secrets by WikiLeaks. Lapan said WikiLeaks has more Pentagon material beyond what the group's founder, Julian Assange, has admitted publicly to possessing.

The military has charged Pfc. Bradley Manning with leaking video to WikiLeaks, as well as downloading documents from military computers while he served as an intelligence analyst in Iraq. Among the documents he is alleged to have taken are 150,000 diplomatic cables. WikiLeaks has denied being in possession of those cables.

What is WikiLeaks?
RELATED TOPICS

Manning is currently being held at a military jail in Quantico, Virginia.

The Stockholm Criminal Court recently issued an international arrest warrant for Assange, saying he is suspected of rape, sexual molestation and illegal use of force.