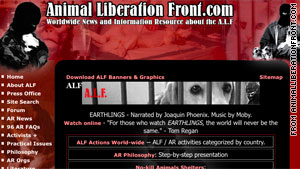 A message on this website said the razor blades were sent to David Jentsch because of his animal research activities.
STORY HIGHLIGHTS
RELATED TOPICS

Los Angeles, California -- -- The FBI and University of California at Los Angeles police are investigating a new round of threats from anti-animal research activists who say they sent AIDS-tainted razor blades and a threatening message to a research professor, a university spokesman said Tuesday.

The university said law enforcement officials confirmed that UCLA neuroscientist David Jentsch received a package at his home containing razor blades and a threatening note. No other details about the package or its contents were given by the university.

The Animal Liberation Front posted an unsigned communique on its website from a group calling itself "The Justice Department at UCLA," claiming its members sent the razor blades to Jentsch because he uses primates for government-funded testing of drug addiction.

"He has no business addicting primates to phencyclidine known on the streets as PCP and other street drugs using grant money from the federal government," said the statement issued Tuesday by the activist group.

Since 2006, other anonymous activists claimed responsibility for at least 11 acts of sabotage, vandalism, criminal damage and firebombing against UCLA faculty or property, either on and off campus, university officials said.

In March 2009, activists seeking to stop the use of animals in research claimed to set fire to Jentsch's vehicle parked overnight outside his home.

Jentsch, a professor of psychology, psychiatry and biobehavioral sciences, uses vervet monkeys in his research into the biochemical processes that contribute to methamphetamine addiction and tobacco dependence in teenagers, and the cognitive disabilities affecting schizophrenia patients, according to the university.

Much of Jentsch's work is funded by the National Institutes of Health, university officials said.

"Responsible use of animals in research aimed at improving the health and welfare of the mentally ill is the right thing to do, and we will continue because we have a moral responsibility to society to use our skills for the betterment of the world," Jentsch said in a statement.

In a phone interview with CNN, Jentsch said the activists have been "using various tactics to get at me."

"They started with incinerating my car," he said. "They have participated in monthly demonstrations outside of my house. Usually the threats are general, this one was very specific. They said they were going to cut my throat, and they named one of my students.

"I'm not afraid. I'm angry. It's so ridiculous in our society that people do this just because they don't like what you do," he added.

"What's happened here recently is only the recent manifestation of a pattern of reprehensible, repugnant criminal activity directed at UCLA researchers," Hampton said. "UCLA is committed to conducting research that helps us to understand better the human body and is making important steps and strides to new diagnoses, treatments and cures to a wide variety of ailments such as Parkinson (Parkinson's disease) and cancer."