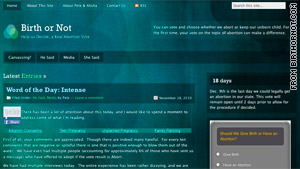 (CNN) -- A Minnesota man who put up a website asking people to help him and his wife decide whether to have an abortion admitted Tuesday they never intended to terminate the pregnancy.

Pete Arnold, who describes himself as a conservative/libertarian and has stirred controversy for his conservative posts on several websites, said he wanted to stimulate conversation about the politically charged subject.

Arnold told CNN he bought the domain name "birthornot.com" before wife Alisha became pregnant about four months ago. He said he had been mulling the idea "for some time," adding that his wife is pro-choice but agreed that abortion was not on the table for them.

"We chose our words very carefully," Arnold told CNN, insisting the site was not a hoax even though there were never any plans to accept the vote results if abortion won.

"A lot of people elect representatives based on this issue alone, yet nothing happens, nothing comes of it, nothing changes." he said, adding that the couple called the baby "Baby Wiggles" to give people more to think about.

"My intent is not to deceive people, but at the same point, I do want people to talk about this. This seemed like a pretty good way to further the discussion, because people don't ever seem to want to talk about it for real if there's no name on it, no Baby Wiggles," he said.

Media reports have identified Arnold as a regular commenter -- frequently anti-abortion -- on such websites as Gawker and the DailyKos, typically using the name "Zeeboid," which is also the name on his vanity license plate. He also has a website by that name and a channel on YouTube, but both were offline Tuesday afternoon. He has also been a regular contributor to a Minnesota radio program called "Race to the Right."

Last week, the Arnolds insisted that their website was legitimate and that they had no agenda. Arnold said the couple intended to end the vote December 7, two days before the last day Alisha Arnold could legally get an abortion, their blog says. But on Tuesday, Pete Arnold said, "We're talking about ending it early. I think people are getting it."