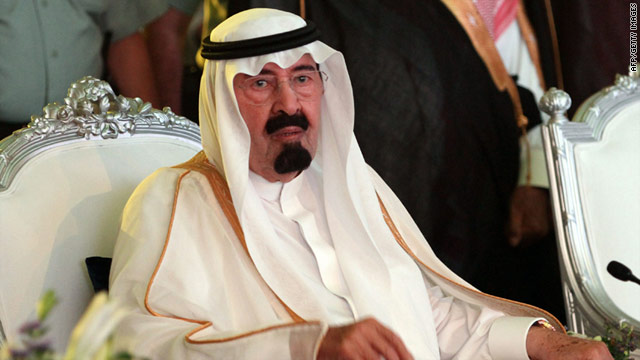 (CNN) -- U.S. diplomatic cables obtained by the website WikiLeaks and published by newspapers in the United States and Europe on Sunday reveal considerable anxiety among the Gulf states about Iran's nuclear program, with the Bahrain's king warning, "The danger of letting it go on is greater than the danger of stopping it."

The cables, many marked "Secret," were among several hundred thousand obtained by WikiLeaks and published by newspapers Sunday.

They reveal great concern among Arab states about Iran's regional ambitions. One cable describes a meeting between Saudi King Abdullah and White House counterterrorism adviser John Brennan and other U.S. officials in March 2009.

According to the cable, the king told the Americans what he had just told the Iranian foreign minister, Manouchehr Mottaki. "You as Persians have no business meddling in Arab matters," the Saudi monarch was quoted as telling Mottaki. "Iran's goal is to cause problems," he told Brennan. "There is no doubt something unstable about them."

The king was also highly critical of the Iraqi Prime Minister, Nuri al Maliki. He is reported to have told his American visitors: "I don't trust this man.... he's an Iranian agent." The cable continues: "The King said he had told both (former U.S. President George W.) Bush and former Vice President (Dick) Cheney: 'How can I meet with someone I don't trust?'"

King Abdullah also welcomed the election of President Barack Obama. "Thank God for bringing Obama to the presidency," he is reported as saying, adding that it had created "great hope" in the Muslim world.

Obama 'not pleased' with disclosure

According to another cable, King Hamadbin Isa al-Khalifa of Bahrain told the commander of U.S. Central Command, Gen. David H. Petraeus, that Iran was the "source of much of the trouble in both Iraq and Afghanistan."

The cable, sent in November 2009 by the U.S. ambassador in Bahrain, added that the king had "argued forcefully for taking action to terminate their nuclear program, by whatever means necessary. 'That program must be stopped,' he said.

Another cable reveals that in the neighboring United Arab Emirates, Foreign Minister Sheikh Abdullah bin Zayed Al Nahyan told a congressional delegation last February that "if Iran goes nuclear, others in the region will move forward on the same track, and the nuclear nonproliferation treaty will completely break down."

According to a cable about the meeting sent by the U.S. ambassador on February 22, the minister added that "a crisis or confrontation in the region would create oil supply problems worldwide."

There was similar apprehension in Egypt about Iran. In a cable sent in February 2009, the U.S. ambassador in Cairo recounted: "President Mubarak told Senator Mitchell during his recent visit here that he did not oppose our talking with the Iranians, as long as 'you don't believe a word they say.'"

According to the cable, the ambassador continued: "Mubarak has a visceral hatred for the Islamic Republic, referring repeatedly to Iranians as 'liars,' and denouncing them for seeking to destabilize Egypt and the region."

A cable from the U.S. ambassador in Oman, meanwhile, quotes the country's Armed Forces Chief, Lt. Gen. Ali bin Majidal-Ma'amari, as saying that "with Iran's continued attitude on the nuclear issue, the security situation in Iraq would remain unresolved."

Citing Oman's preference for a non-military solution, he nevertheless acknowledged that a nuclear-armed Iran as opposed to war with Iran posed "an extremely difficult dilemma for all of us," the cable continued.

There is advice in another cable about to handle Iran.

According to a readout of a November 2007 briefing from the then-British ambassador in Tehran, Geoffrey Adams, the UK envoy had "recommended being steady and firm, tough but not aggressive, and at the same time, seeking to engage."

The cable says: "He stressed that Iranians are obsessed with the West and this obsession at times blinds them to their interests."