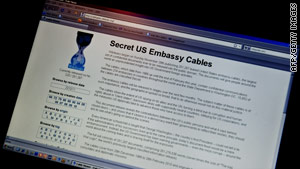 The WikiLeaks site was working normally on Monday.
STORY HIGHLIGHTS

(CNN) -- A computer hacker who calls himself "The Jester" claimed responsibility for the cyber attack which took down the WikiLeaks site Sunday, shortly before it started posting hundreds of thousands of classified U.S. diplomatic cables.

He normally attacks Islamist websites, announcing "TANGO DOWN" on his Twitter account when claiming to have attacked a site. "Tango Down" is Special Forces jargon for having eliminated a terrorist.

Over the past few days, the Jester has targeted a handful of websites for reasons including "online incitement to cause young Muslims to carry out acts of violent jihad," "distributing jihadist instructional materials," and "for the online radicalization of young Muslims in US and Europe."

WikiLeaks holds back -- some

The Jester describes himself as "an ex-soldier with a rather famous unit, country purposely not specified."

"I was involved with supporting Special Forces, I have served in (and around) Afghanistan amongst other places," he told the website threatchaos.com early this year.

"This annoyed me... so I got busy," the Jester wrote on his blog in September.

Cyber security expert Mikko Hypponen of F-Secure believes the Jester was really behind the hack, he told CNN.

He said he did not know who was behind it, and he seemed surprised when CNN told him an anti-Islamist hacker was taking credit.

The hacker did not immediately respond to CNN requests for comment. WikiLeaks posted that it was under attack at about 11 a.m. ET Sunday, not long before its latest and largest leak.

The site seemed to be running normally as of early Monday morning.