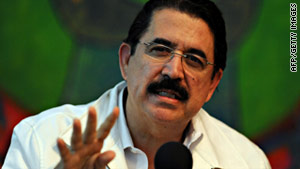 (CNN) -- The U.S. Embassy in Honduras unequivocally found that the forced removal of that nation's president last year was a coup that ushered in an illegitimate government, despite the administration's more measured tone in public, a State Department cable, made public by WikiLeaks, shows.

An analysis prepared by the U.S. Embassy in Tegucigalpa called Roberto Micheletti, who became de facto president, "totally illegitimate," although Secretary of State Hillary Clinton publicly recognized both sides as players and pushed for them to negotiate a solution.

Honduran President Jose Manuel Zelaya was ousted in a coup in June 2009. Micheletti, president of Congress, became the de facto national president until elections were held for a new head of state.

The United States has recognized the government of current President Porfirio Lobo, but it is clear from the document that the diplomatic corps did not consider the government that handed power over to him to be legitimate.

At the time of his ouster, Zelaya was unpopular among lawmakers, the judiciary and the military alike for his insistence on pushing forward with a planned referendum that could have extended his term in office. Although he never publicly said that was his goal, it was supposed by many, and a court had ruled the proposed vote illegal.

"No matter what the merits of the case against Zelaya, his forced removal by the military was clearly illegal, and Micheletti's ascendance as 'interim president' was totally illegitimate," the cable states.

The analysis is blunt in its criticisms of the opposition to Zelaya for its actions during the political turmoil.

Supporters of Zelaya's ouster argued that he had broken the law, something that the State Department document described as "alleged, but not proven."

It called a resignation letter that was presented to the Honduran Congress "a clear fabrication."

The document also notes that the congressional "vote" to push Zelaya out occurred "after the fact and under cloak of secrecy."

According to the U.S. Embassy's analysis of the Honduran constitution, the removal of Zelaya should have been a judicial process, with formal criminal charges brought by the attorney general and a trial.

"In our view, none of the above arguments has any substantive validity under the Honduran constitution. Some are outright false. Others are mere supposition or ex-post [facto] rationalizations of a patently illegal act," the document states.

The United States did publicly call Zelaya's removal a coup and eventually stopped all nonhumanitarian aid to the country in an effort to pressure Micheletti to negotiate. But the State Department backed the efforts of former Costa Rican President Oscar Arias to mediate a truce between the two sides, giving the Micheletti government a sort of recognition.

Some countries are still holding out on recognizing Honduras because the election that brought Lobo to power happened under the watch of a de facto government. The document shows that the United States agreed with Micheletti's illegitimacy, but moved forward diplomatically by accepting the election results.

The embassy cable concludes: "The Honduran establishment confronted a dilemma: near unanimity among the institutions of the state and the political class that Zelaya had abused his powers in violation of the constitution, but with some ambiguity what to do about it. Faced with that lack of clarity, the military (or) whoever ordered the coup fell back on what they knew -- the way Honduran presidents were removed in the past: a bogus resignation letter and a one-way ticket to a neighboring country."

Since this weekend, the whistle-blowing website WikiLeaks has published hundreds of classified U. S. diplomatic messages, the first of what the organization says is a quarter million similar documents.

In addition to being published on the WikiLeaks website, the documents were acquired in advance by five major newspapers in Europe and the United States (The New York Times, The Guardian of Britain, El Pais of Spain, Le Monde of France and Der Spiegel of Germany).