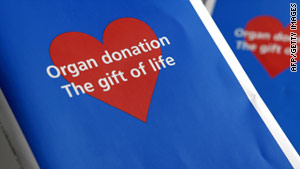 Under the program, only kidneys can be recovered from deceased individuals who die from cardiac arrest or stroke.
STORY HIGHLIGHTS
RELATED TOPICS

(CNN) New York -- Some 911 calls that involve cardiac arrest or stroke could bring a second emergency crew to the scene as part of a pilot program in New York intended to more quickly recover organs from potential donors, the mayor said Wednesday.

When efforts by the first ambulance teams to save patients' lives fail and if the victims are registered organ donors, a newly created dispatch unit monitoring emergency calls will instruct secondary crews -- called Organ Preservation Units -- to bring the victims to a medical center where their kidneys can be recovered, according to New York Mayor Michael Bloomberg.

Under the program, only kidneys can be recovered from deceased individuals who die from cardiac arrest or stroke.

Donors must be between the ages of 18 and 60, must be disease-free and cannot have been involved in a violent event like a car crash, according to Dr. Lewis Goldfrank, director of emergency services at Bellevue Hospital in Manhattan, New York.

The deceased must also first be identified as a registered donor through a donor card, a driver's license or an online registry, and the family will have to give their consent, officials said.

"We have about 20 minutes to accomplish an agreement with a family member ... to say they affirm the wishes of the person who is deceased," Goldfrank said Wednesday in New York.

If an agreement is reached, two-person organ preservation teams will begin cardiopulmonary resuscitation on the deceased person in an effort keep blood flowing to their organs during transport to Bellevue Hospital.

Once the team has arrived at the medical center, the deceased will undergo extracorporeal membrane oxygenation, a technique that provides artificial cardiac and respiratory support to the body and resuscitates organs when the heart has stopped beating, according to Michael Goldstein, medical director of the New York Organ Donor Network, a nonprofit, federally designated organ procurement organization.

Organs can survive without circulation for a maximum of about 40 minutes, he said, limiting the number of usable organs from the vast majority of people who die outside of hospitals.

The pilot program, which is limited to parts of Manhattan, is intended to speed up the process of recovering good organs before tissue deterioration renders them unusable for living patients in need of a transplant.

Under the initiative, organ recovery by way of transport units can occur only under physician supervision at the Bellevue Hospital Medical Center.

About 8,000 people in New York -- 109,000 nationally -- are waiting for life-saving organ transplants, according to the US Department of Health and Human Services.

"Donating an organ can save a person's life; that's why I am an organ donor," Bloomberg said. "This new pilot program will help us test a process that could transform the way we donate organs and help save many lives."

Brooklyn resident Regina Mirailh, who lost her son in a car accident, said he could not have fulfilled his desire to be an organ donor had he not died in a hospital.

"It's kind of hard to put a spin on such an ugly face, but I had to come to reality," she said. "What it is to give the gift of life. You actually give the gift, someone gets to live."

The pilot program, called the first of its kind in the United States, involves partnerships between Bellevue Hospital and the city's police and fire departments, according to the mayor's statement.

Starting Wednesday, it will last five months and is intended to test the feasibility of recovering organs from the more than 400 eligible donors who die of cardiac arrest outside New York hospitals each year, it said.

But the program has also raised fears over the possibility of illegal organ harvesting, as well as broader ethical questions over how and when death is determined only shortly after paramedic attempts to resuscitate have failed.

Authorities have tried allaying those concerns and others by demonstrating a clear separation between the two units.

"There is a real firewall between the attempt to save life and this effort to recover organs," said Elaine Berg, president and CEO of the New York Organ Donor Network. "We've had ethics groups and focus community groups on this issue, so we're making every effort to ensure that we're beyond safe ground."

The project is bankrolled by a $1.5 million federal grant.