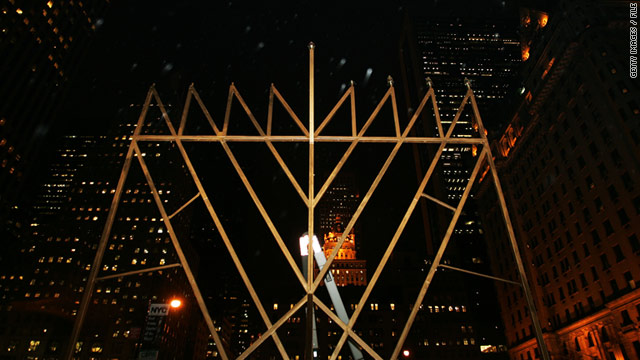 (CNN) -- A giant menorah will light the sky above New York on Wednesday to mark the start of Hanukkah, a Jewish holiday celebrated for eight days and nights.

Jews celebrate Hanukkah by lighting candles each night in a menorah, an eight-branch candelabra with a ninth, elevated branch known as a shamash.

Organizers will light the first candle of what they called the world's largest menorah at Central Park. Lighting of the menorah will be held at 5:30 p.m. daily through December 8.

The 32-foot high, gold-colored, 4,000 pound steel structure features genuine oil lamps, according to organizers. It has glass chimneys to protect the lights from strong winds.

The menorah marks Hanukkah, the Jewish Festival of Lights that mostly falls in December.

"The menorah stands as a symbol of freedom and democracy, strength and inspiration, delivering a timely and poignant message to each person on an individual basis," said Rabbi Shmuel M. Butman, director Lubavitch Youth Organization.

The shamash, which is lit first, is used to light the others candles each night of the holiday.

The holiday of Hanukkah celebrates the rededication of the Temple in Jerusalem after Syrians were chased out of the Holy Land. It also marks the eight days that a menorah burned with one day's worth of oil.