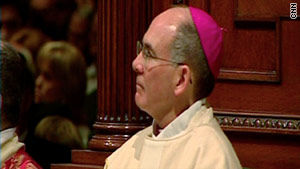 (CNN) -- The new Roman Catholic archbishop of Seattle, J. Peter Sartain, was installed Wednesday afternoon with a Mass in the archdiocese's cathedral, amid ongoing controversy over Sartain's ordination of a priest who later pleaded guilty in a molestation case.

"I resolve to serve faithfully the spiritual needs of this church," Sartain told congregants and priests filling St. James Cathedral. He then officially assumed his seat behind the altar to a minute-long ovation.

Sartain, 58, who was ordained in 1978, most recently served as bishop of the Joliet, Illinois, diocese for four years. It was an official act during his tenure there that prompted a handful of protesters to gather outside the cathedral Wednesday.

John Shuster of the Survivors Network of those Abused by Priests said he was upset by the Vatican's decision to install Sartain because Sartain ordained Alejandro Flores in 2009 even though diocesan officials had concerns about Flores' use of male pornography.

"Why would he even ordain him anyway? Who would take that chance?" Shuster told CNN affiliate KIRO-TV in an interview before the protest.

After his ordination, Flores was accused of molesting a suburban Chicago boy over a five-year period beginning in 2005, SNAP leaders said, citing news accounts. Flores pleaded guilty in September and was sentenced to four years in prison.

SNAP describes itself as the world's oldest and largest support group for clergy abuse victims, and the group is asking the church and Illinois prosecutors to provide more information about Sartain's handling of allegations surrounding Flores.

The Archdiocese of Seattle has said that once Sartain found out about the allegations, he reported them.

At then end of his installation Mass, Sartain turned to his predecessor, Brunett, and praised him.

"A final word of thanks goes to my friend, Archbishop Brunett," Sartain said, whose remarks drew supportive applause. "What an extraordinary job he has done in the Archdiocese of Seattle.

"Thank you so much for welcoming me as you have. For many years to come, we will love our Lord," Sartain told attendees.