Slow but sure progress on gay rights in the U.S. 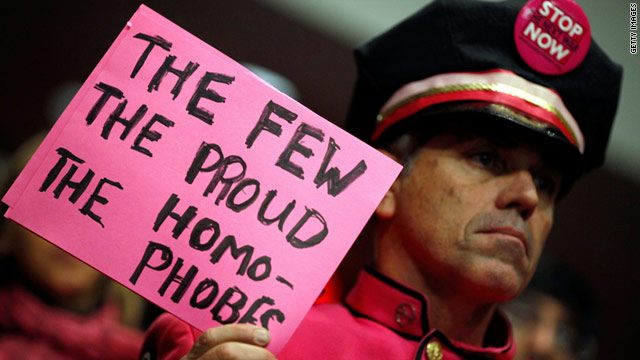 A demonstrator from "Code Pink for Peace" holds a sign during a hearing of the Senate Armed Services Committee on Capitol Hill.
STORY HIGHLIGHTS

(CNN) -- The people who used to be called "queer" are looking more conventional in the United States these days, and some of the most tradition-bound institutions in the country are cautiously coming to accept them.

This week, the Pentagon released an extensive study which concluded that there would be no lasting harm in letting gay and lesbian personnel be open about their sexuality.

"We have a gay guy," one respondent told Pentagon pollsters. "He's big, he's mean, and he kills lots of bad guys. No-one cared that he was gay."

The U.S. is hardly a world leader on gay rights. Laws banning same-sex intimacy were still on the books in several states until the Supreme Court overturned them just seven years ago. Today, only a handful of states license same-sex marriage or civil unions; dozens explicitly prohibit it.

America was founded by the Puritans, after all. Some modern historians argue that they weren't really the prudes their dour place in popular memory suggests. But Puritans only looked favorably on pleasures of the flesh in the context of marriage, which they couldn't imagine between people of the same gender. Much of the United States is still heir to that opinion.

Pentagon: DADT can safely be repealed

What may be easy to overlook is that the politics are changing. Mainstream Republicans no longer campaign on a traditionalist "family values" agenda. The Tea Party movement has chosen to stay clear of the subject entirely.

Popular culture is slowly making more room for gay and lesbian couples, in films such as "The Kids are All Right" and television programs like "Modern Family."

Business culture is changing too. Many large companies, including the one that owns CNN, offer heterosexual and same-sex couples the same employee benefits. News culture has changed as well. When a prominent politician or personality "comes out" about their sexuality, it's no longer a scandal and usually, it's hardly even a "story."

But the military is different. With almost 2.3 million men and women on active duty or reserve, it's one of the largest employers in the country. It's the very embodiment the nation's patriotic ideals and its most conservative instincts. The U.S. military has opposed both racial integration in its ranks and fuller gender equality. (American women already serve in some very dangerous roles but are officially excluded from combat units.)

Maybe most important is that even in peacetime, the military makes unique demands on its personnel. At a time like this, with the United States fighting two wars, the demands are incalculably greater. So the debate about gay and lesbians in the military has been profound and passionate.

"I think this is such a contentious issue in our society, that you can't use the military, especially during a wartime or given some of the ongoing war effort in Afghanistan, to try to change something without thinking through," said retired navy commander Kirk Lippold.

The military did think it through. The Pentagon has spent the last 17 years enforcing a policy dubbed "don't ask, don't tell" that stipulates that gay and lesbian personnel can only serve if they keep their sexuality secret. Last year, a little more than one person a day was discharged because they were discovered.

For Republican Senator John McCain, a decorated veteran influential on military issues, the policy is working.

"There were no problems in the military with 'don't ask, don't tell," McCain said. "The military is at its highest point in recruitment, in retention, in professionalism and capability so to somehow allege that this policy has been damaging to the military is simply false."

In its new study, the Pentagon heard from 115,000 men and women in uniform. The results were dramatic. Seventy percent said ending the official secrecy would have a positive impact, mixed impact or no impact at all.

"America has moved on and, if you look closely at this study, I think you'll find that America's military is, by and large, ready to move on as well," said Mike Mullen, chairman of the Joint Chiefs of Staff. "Should repeal occur, some soldiers and marines may want separate shower facilities, some may ask for different berthing, some may even quit the service. We'll deal with that. But I believe, and history tells us, that most of them will put aside personal proclivities for something larger than themselves and for each other."

The White House and Congress had been waiting to hear from the Pentagon but even now that the military has spoken, the policy is still written in law. President Barack Obama refuses to abandon it unilaterally. The administration says it wants Congress to repeal "don't ask, don't tell to demonstrate that there's a political consensus in the country.

Congress, especially now, is a complicated place. It will shift to the right in a few weeks, when a new Republican majority elected last month to the House of Representatives officially takes over. The Senate will get more Republican members as well.

So it's unlikely that Washington will repeal "don't ask, don't tell" in the near future. Things are moving slowly for gays and lesbians in the United States, but remarkably, they seem to be broadly moving in only one direction.