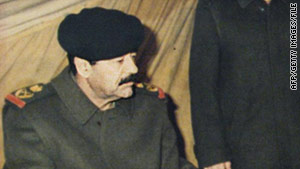 Asked if he was afraid before his execution, Hussein said he'd anticipated death since he took power, the cable says.
STORY HIGHLIGHTS

Washington (CNN) -- A January 2007 State Department cable published by WikiLeaks reveals new details about what happened before and during the controversial execution of former Iraqi President Saddam Hussein.

The document, which recounts a meeting between the then-U.S. ambassador in Baghdad, Zalmay Khalilzad, and chief prosecutor Munqith Faroon, was written two weeks after the event. It reveals many of the minute details involved in the preparations for the execution as well as Hussein's final moments, when cell phone camera video captured him on the gallows while being taunted by witnesses.

Fourteen Iraqi officials took a helicopter flight from the International Zone to the execution site. According to the document, these officials were searched by U.S. marshals, who took their cell phones "for operational security reasons" and returned the devices when the officials returned by helicopter after the execution.

According to the cable, Faroon said the only witnesses were the 14 officials who flew by helicopter and the guards who were already on the scene. But the same document contradicts him, as it reports an SUV with six Iraqi government personnel arrived at the scene an hour before the execution. These six are described as the Iraqi government's "video personnel" and personal security detail.

The cable also notes it is unknown if these six officials were searched by Iraqi guards at the site, or how many of them actually entered the execution building, because there were no U.S. personnel in the courtyard or the building.

There was one aspect of the execution that the United States was involved in: the cable says the execution platform was built by Americans. Faroon told Khalilzad that "the original platform was not built to standards," and that criminals were suffering during executions because of it.

The author of the cable placed responsibility for how the execution was handled squarely on the shoulders of the Iraqi government, saying it "was responsible for the execution building, access to the building and courtyard, and the conduct of the execution. The [government of Iraq's] lack of a clear and coordinated plan to control the witnesses and conduct the execution resulted in a hastily run and confusing event."

Faroon admits he "sympathized" with Hussein, who "entered with his covered head, hands tied and shaking involuntarily."

After the judge read the verdict and death sentence, the cable says, Hussein "became more animated and began speaking, 'as if he were still the president.'"

After Hussein was escorted to the room where the execution was to take place, Iraqi National Security Adviser Mowaffak al-Rubaie asked him if he was afraid. According to the cable, Hussein responded that "he was not afraid, that he had been 'anticipating this moment' since he first came to power, knowing that as president he had many enemies."

Hussein was holding a Quran up until his final moments, and asked for someone to ensure that it was given to the son of Awad al-Bandar, the head of Iraq's Revolutionary Court, who was to be executed approximately two weeks later. Hussein handed Faroon the book after he agreed to take it.

According to the document, Faroon says that up to this point, "nothing 'improper' had occurred."

When the guards began tying Hussein's feet together, he asked who would help him get up the stairs. According to Faroon, it was at this point a guard told Hussein to "go to hell." The cable reports that Faroon "raised his voice immediately and warned people that 'he would not allow the guards or witnesses to speak' to Saddam."

When Faroon turned around to admonish the witnesses, he "saw two government officials openly taking photos with their mobile phones."

Hussein was escorted up the stairs and declined an offer to have his head covered with a hood. He began to pray, and before he finished, Faroon says, one person began shouting "Muqtada, Muqtada, Muqtada," a reference to Muqtada al-Sadr, the radical Shiite cleric whose father is believed to have been murdered by Hussein's regime.

Faroon again raised his voice to silence the witnesses. The document says Hussein died instantly, and his body was removed from the platform and placed in a bag. A religious leader later made sure that the body was washed in observance of Islamic traditions.

The cable ends with a paragraph about Khalilzad asking Faroon about what changes the Iraqi government would make for the upcoming executions of al-Bandar and Barzan Hassan, Saddam's half-brother and former intelligence chief. Faroon responded that fewer witnesses would be allowed; a prosecutor, a judge, a religious leader, and the prison director, as Iraqi law requires.

"This, [Faroon] concluded, will prevent unacceptable behavior and unnecessary controversy," the document concludes.

The cable was dated January 15, 2007, the same day the executions of al-Bandar and Hassan were carried out. Hassan was decapitated during his hanging.

Two security guards working for the Iraqi Justice Ministry were later detained by authorities after cell phone video of Hussein's execution was posted on the internet.