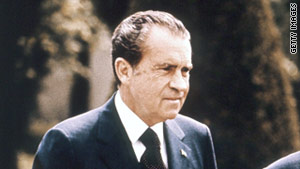 (CNN) -- The latest release of White House tapes from the Richard Nixon Presidential Library shows how Watergate increasingly consumed Nixon as his second term was getting underway, the library's director said Thursday.

Much of Nixon's tapes about Watergate have long been made public, but on Thursday, the library released additional White House recordings from February 1973 to March 1973, plus some from early April 1973, director Timothy Naftali said.

The Watergate political scandal, resulting from a break-in at the Democratic National Committee headquarters, eventually led Nixon to resign, the only president to ever do so.

"Watergate is truly heating up for the administration by the end of this particular release of tapes, in March of 1973, and you can see it taking more of the president's time," said Naftali, who was a Cold War and presidential historian before joining the National Archives, which runs the Nixon library.

"The tapes are a magnificent aural history of two very busy and important months in the life of President Nixon's second term," Naftali added.

On Thursday, the library opened a trove of records at the facility and online, and the new information includes 265 hours of White House tapes. The library, in Yorba Linda, California, also released more than 140,000 pages of presidential records and 75 hours of video oral histories.

About 2,500 pages of formerly classified national security records have also been made public, and some of them have been posted on the library's website (www.nixonlibrary.gov), including one about covert actions in Chile and another about an understanding with British Prime Minister Edward Heath on the use of British bases and U.S. nuclear weapons.

"I am agreeable to the amendments as proposed and shall consider the understandings existing between our governments with regard to consultation on the use of nuclear weapons, as so amended, to remain fully in effect," Nixon said in a letter to Heath.

One memo is written January 17, 1973, by current anchor and former Nixon aide Diane Sawyer, who says she understands that a decision is forthcoming on the "fate" of Donald Johnson as administrator of Veterans Affairs (now Veterans Administration). Johnson resigned in 1974 under pressure from Congress and veterans' groups for alleged mismanagement.

"Do you have information which would enable us to provide the Star with a leak?" Sawyer wrote to Larry Higby, assistant chief-of-staff. The memo contains handwritten notes stating "Approve saying ..." or "Disapprove because...."

The newly available materials are pieces to a larger mosaic about the Nixon presidency, Naftali said.

"This release is significant for people interested in how our government thought about the Vietnam cease-fire and its durability, and it's very significant about the release of American POWs from southeast Asia," Naftali said.

"It's sort of the first release that has materials relevant to the U.S. government's handling of the Wounded Knee incident," when followers of the American Indian Movement seized the South Dakota town for 71 days starting in February 1973, Naftali said.

"And there's very significant material about the management of U.S. policy toward the Middle East," Naftali said.