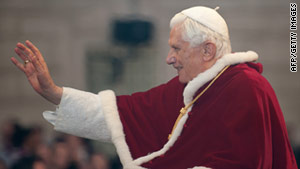 At the time the cables were written, victims groups were complaining about Benedict XVI's handling of the scandal.

(CNN) -- The Holy See's press office Saturday urged the public to read the latest Vatican-related diplomatic cables released by WikiLeaks with "great prudence," claiming the allegations cited in the documents reflect only the view of their writers.

Without going into specifics on a number of allegations that emerged with the U.S. cables, the Holy See Press Office said that the reports "reflect the perceptions and opinions of the people who wrote them and cannot be considered as expressions of the Holy See itself."

"Their reliability must, then, be evaluated carefully and with great prudence, bearing this circumstance in mind," the statement said.

Among the documents were cables showing that relations between the Vatican and Ireland deteriorated sharply as the Holy See appeared to ignore a commission looking into complaints of physical and sexual abuse of children by Irish priests.

One cable from earlier this year says the Vatican was angered by the way the Murphy Commission -- which was looking into the how complaints of abuse had been handled by the Church and Irish government -- sidestepped normal diplomatic channels.

The commission had written directly to the Vatican to seek information and requested a meeting with the Vatican's representative in Ireland. The Vatican envoy did not respond, according to the cable.

The cable was one of several published Friday by the Guardian newspaper in London.

The Murphy Commission was appointed after another inquiry issued a report in May 2009 detailing horrific abuses, including 325 alleged cases of abuse by priests, and concluding that the problem was endemic.

"The Vatican believes the Irish government failed to respect and protect Vatican sovereignty during the investigations," the charge d'affaires at the U.S. Embassy to the Holy See, wrote in February 2010.

"Adding insult to injury, Vatican officials also believed some Irish opposition politicians were making political hay with the situation by calling publicly on the government to demand that the Vatican reply."

But the cable added: "Much of the Irish public views the Vatican protests as pettily procedural and failing to confront the real issue of horrific abuse and cover-up by Church officials."

"Resentment toward the Church in Rome remains very high, particularly because of the institutionalized cover-up of abuse by the Catholic Church hierarchy."

But U.S. diplomats credit the Vatican with responding to the unfolding crisis in Ireland "with uncharacteristic speed."

"The Vatican's relatively swift response to this crisis showed it learned key lessons from the U.S. sex abuse scandals in 2002 but still left some Catholics -- in Ireland and beyond -- feeling disaffected," the U.S. charge d'affaires wrote.

Victims' associations were complaining at the time that Pope Benedict XVI had not issued an apology for the abuses and had not ordered the removal of the remaining bishop accused of the cover-up, even though he said he shared the "outrage, betrayal, and shame" of Irish Catholics.

The following month the pope did offer an apology to the victims. "You have suffered grievously and I am truly sorry. I know that nothing can undo the wrong you have endured," he said.

Looking to the longer-term, the U.S. diplomat wrote that the prestige and power of the Irish Catholic Church had been falling ever since its peak with the 1979 visit of Pope John Paul II. The abuse scandals had come amid increasing secularization of society and might further reduce the influence of the Catholic Church, she wrote.

"Our contacts at the Vatican and in Ireland expect the crisis in the Irish Catholic Church to be protracted over several years, as only allegations from the Dublin Archdiocese have been investigated to date," the cable says.