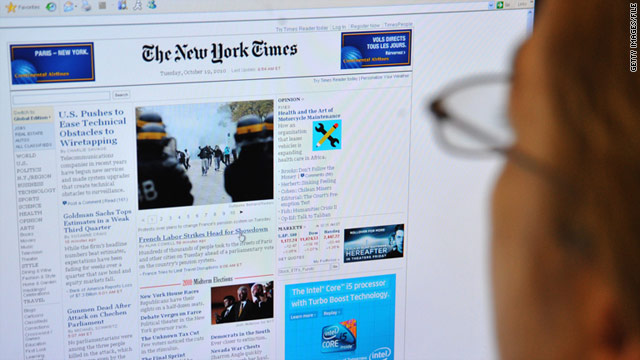 The New York Times website is one of three newspaper websites that the Air Force is blocking.
STORY HIGHLIGHTS

(CNN) -- The U.S. Air Force is denying its personnel access to websites carrying documents released by WikiLeaks, including those of some news organizations, a spokeswoman said Tuesday.

The White House Office of Management and Budget has already forbidden federal employees and contractors from accessing classified documents publicly available on WikiLeaks and other websites via computers or mobile devices. But Maj. Toni Tones said the Air Force has cut off access to over 25 sites, including WikiLeaks and three newspapers that have worked with the site to release a cache of U.S. diplomatic cables -- The New York Times, The Guardian in Britain and Germany's Der Spiegel.

"This is consistent with the direction received in August 2010 that stated Air Force personnel should not access the WikiLeaks website to view or download the classified information," Tones told CNN.

The other sites may not necessarily be WikiLeaks-related, Tones said but she couldn't explain what other sites were blocked and why. "We look at these sites on a daily basis routinely," so the number changes day by day, she said.

The government -- particularly the State and Defense Departments, whose documents have made up the lion's share of the WikiLeak leaks -- has been reviewing security as it pertains to accessing documents on its secret servers, with an eye toward preventing unauthorized leaks.

But some see no logic in barring access to documents that are now, like it not, publicly accessible.

"This seems like a rather pointless protest," said CNN legal analyst Jeffrey Toobin. "Our enemies can see the documents, but not those whom we trust to defend our country."

WikiLeaks, which facilitates the disclosure of secret information, began releasing a cache of more than 250,000 U.S. diplomatic cables from around the world in November. The site previously released hundreds of thousands of military documents from the wars in Iraq and Afghanistan.

A U.S. Army intelligence specialist, Pfc. Bradley Manning, is suspected of releasing the documents to WikiLeaks. Manning is currently awaiting trial on charges of illegally downloading classified material and providing video of a 2007 helicopter attack in Iraq to WikiLeaks.