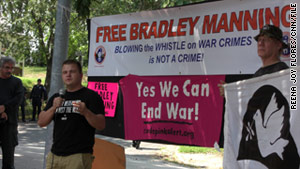 Activists protest Pfc. Bradley Manning's detention in August outside a Marine Corps base in Quantico, Virginia.

Manning is accused of releasing documents to WikiLeaks, a website known for leaking official secrets. Manning is currently awaiting trial on charges of illegally downloading classified material and providing video of a 2007 helicopter attack in Iraq to WikiLeaks.

The vote was 8-0, with one abstention, said Mary Kay Clunies-Ross, spokeswoman for Berkeley's city manager's office.

Mayor Tom Bates said the council didn't have enough information to determine whether Manning is "a hero or traitor."

"We don't even know if he (leaked the files)," Bates said. "We're interested in not trying to make that determination. We are willing to watch it and to consider it in the future, and if we feel it's appropriate to us to make some statement, we'll bring it back to our council."

"We had an hour of discussion where we heard from the public and we heard every conceivable issue related to Pfc. Bradley Manning," Bates said. "We heard everything from he was a hero to a traitor and everything in between."

Bates said the motion was brought to the council by the Peace and Justice Commission, a group of volunteers that includes council members' appointees.

"A lot of people were upset that it wasn't a very well thought out," Bates said. "There was some feeling among us at the city council of not wanting to add credence to that."

In response to critics of the city council even holding the vote, Bates said, "They said the same thing when we wanted to have gay rights and civil rights. We're one of the places in the world where ideas percolate. We're OK with our role. We think we did the right thing in this case, which is basically raise the issues."