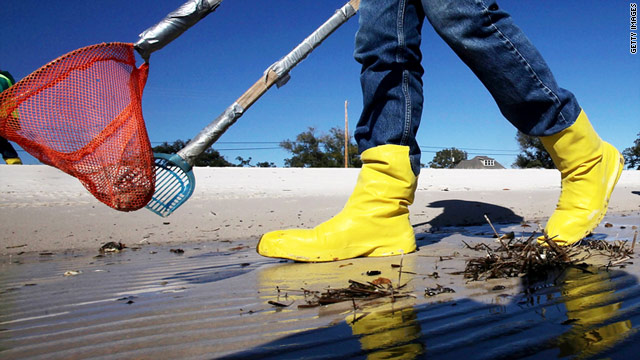 Washington (CNN) -- The federal government Wednesday joined the dozens of lawsuits against BP and several other companies over the massive oil spill in the Gulf of Mexico, seeking unlimited penalties against all but one firm.

In a lawsuit filed in New Orleans, the Justice Department accuses BP, its partners in the ruptured well and drilling contractor Transocean of failing to take "necessary precautions" to prevent or control the April 20 blowout. The spill eventually dumped an estimated 205 million gallons (4.9 million barrels) of crude into the Gulf over nearly three months.

"We intend to hold them fully accountable for their violations of the law," Attorney General Eric Holder said in announcing the lawsuit.

The suit asks the court for civil penalties under the Clean Water Act and to declare eight of the defendants liable without limitations under the federal Oil Pollution Act. It asks a court to impose all removal costs and damages caused by the oil spill, including damages to natural resources, on the companies, according to the Justice Department and the Environmental Protection Agency.

Fines under the Clean Water Act can run up to $4,300 per barrel of oil spilled, EPA Administrator Lisa Jackson said.

"This is about getting a fair deal for the region that suffered enormous consequences from this disaster, and it's also about securing the future of the Gulf," Jackson said.

The suit will join nearly 80 others that have been consolidated before a federal judge in New Orleans. The defendants include BP and oil companies MOEX and Anadarko, which were partners in the Macondo well off Louisiana; Transocean and its partner, Triton Asset Leasing; and Transocean insurer QBE/Lloyd's. The insurer is the only company not being sued under the Clean Water Act or and the only company against which the government is not seeking unlimited damages.

"The spill necessitated a government response unprecedented in size, duration, and expense," the lawsuit states. "As a result, the United States has sustained, and will continue to sustain, significant costs and damages."

BP, Transcoean and cementing contractor Halliburton have pointed fingers at each other since the blowout, which sank the Transocean-owned drill rig Deepwater Horizon and killed 11 workers aboard. Halliburton was not named in Wednesday's lawsuit, but Holder said both civil and criminal investigations were still under way, and other defendants could be added.

But two of the key defendants, Transocean and Anadarko, put the blame on BP.

A Transocean spokesman, Brian Kennedy, said that responsibility for the disaster "lies solely with its owner and operator": BP.

"This fact is made clear by both the letter and spirit of the law, is reinforced in official contracts between BP and other parties -- including Transocean and the U.S. government -- and was reaffirmed by BP in public statements following the incident."

Anadarko, which owns 25 percent of the well, said the lawsuit was "not unexpected and more procedural in nature." The company reiterated its previous criticism of BP, saying its decisions on the rig "likely amount to gross negligence and/or willful misconduct."

BP, however, said the filing is "solely" a statement of allegations that must be heard by a court.

"BP will answer the government's allegations in a timely manner and will continue to cooperate with all government investigations and inquiries," the company said in a statement. "Alone among the parties, BP has stepped up to pay for the clean-up of the oil, setting aside $20 billion to pay all legitimate claims. We took these steps before any legal determination of responsibility and will continue to fulfill our commitments in the Gulf as the legal process unfolds."

"As a non-operating minority interest holder in the well, we were not involved in the operations or decisions that occurred on the drilling rig. We recognize that we may have obligations under federal law, and we will continue to look to the operator to pay all legitimate claims as it has committed to do," the company said.

Tony West, the head of the Justice Department's civil division, said the suit does not ask for a specific amount of damages "because it's going to take years" to fully calculate the costs of the spill. BP says it has paid $4.2 billion in damages and has agreed to put $20 billion in escrow to pay for cleanup, for which it is responsible under federal law.

The company has estimated that the full cost of the spill may reach as high as $40 billion.

In addition to the Justice Department, several other bodies are investigating the disaster. A presidential commission investigating the spill is due to present its final report January 11, while a joint Coast Guard-Interior Department panel is slated to deliver its findings later that month.