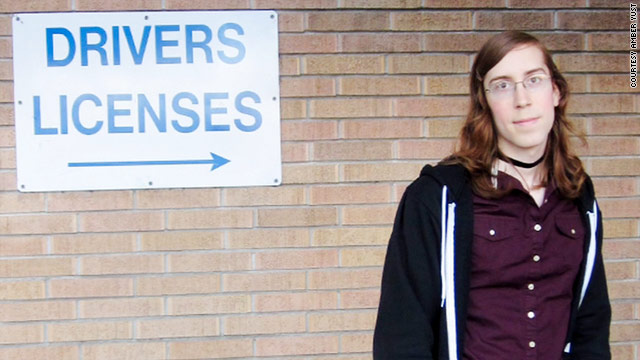 Amber Yust said she received a threatening letter from a California DMV employee after she changed her name.
STORY HIGHLIGHTS

(CNN) -- A California Department of Motor Vehicles (DMV) employee who allegedly wrote a letter to a transgender woman and condemned her to hell has resigned, officials said Thursday.

The employee, who worked for the DMV for two years, resigned Wednesday and will not receive benefits or unemployment, according to department spokesman Mike Marando.

"This in no way diminishes the severity of the situation," Marando said, adding officials believe the DMV employee's behavior was an isolated matter.

The attorney for the transgender woman said the employee should have been fired, instead of being allowed to resign.

Amber Yust told HLN's Jane Velez-Mitchell on Wednesday night that she got the letter after she went to a San Francisco DMV office in October and successfully changed her name from David to Amber and updated the gender on her license.

According to Yust and her attorney, the DMV employee used her confidential personal information to send the letter.

Transgender female fears for her safety

"I have learned that the reason for the vast majority of gender change operations is the client's homosexual orientation," the letter dated October 22 states. "The homosexual act is an abomination that leads to hell."

Yust said she also got a pamphlet from a church, which she said contained offensive material directed at her sexual orientation and gender.

The DMV employee had been placed on administrative leave with pay pending an investigation after Yust came forward, according to the San Francisco Chronicle.

George Valverde, director of the DMV, in a statement Thursday said the employee "acted well outside the course and scope of his duties. We recognized this was unacceptable and wholly unauthorized behavior by this former employee."

Yust's attorney, Christopher Dolan, said the employee refused to assist another transgender person in 2009 and kept his job.

The DMV employee went through a discipline process and received sensitivity training and counseling after that incident, Marando said. Other DMV employees also received training on transgender situations, he said.

The 9,000 DMV employees routinely receive training on a variety of issues, Marando added.

"We emphasize that customers are treated fairly and equitably," Marando said.

Dolan has filed a damage claim with the state, saying Yust suffered embarrassment and emotional distress. It asks for damages in excess of $25,000.

"Why didn't they fire him the first time?" Dolan said of the DMV field representative. "They let him sit at home for two months."