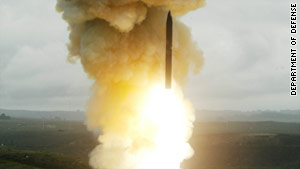 Washington (CNN) -- America has invested billions of dollars to develop, test and deploy a group of missiles called "ground-based interceptors" whose sole purpose is to knock down an incoming ICBM. Dozens of missiles are ready to be fired if the worst should happen.

But another failed test of the system Wednesday raises serious questions about whether the system is making the nation any safer.

"It wasn't a good day, not at all," said Riki Ellison, founder of the Missile Defense Advocacy Alliance, a non-profit group that urges missile defense development. "If you're the American public, you've paid a lot for this system, you want to make sure that you are going to be protected. This doesn't give the confidence that you need."

The whole program reportedly has a budget of about $10 billion a year. Each test, according to Ellison, costs about $100 million, including the $60 million to $70 million for each of the ground-based interceptors, or GBI missiles.

The test began with the launch of a target missile imitating an ICBM from an atoll in the Marshall Islands far out in the Pacific Ocean. A satellite in space detected the launch, other radar systems on the ground and at sea tracked the missile. All that information was sent to a missile silo at Vandenberg Air Force Base in California. A GBI missile launched with the goal of hitting the target missile warhead.

At top speeds the two missiles were moving toward each other at more than 20 times the speed of sound.

But military officials insist that even though the interceptor did not destroy the incoming target "warhead," the test was not a total failure.

Rick Lehner, a spokesman for the Missile Defense Agency, said the launches of the kill vehicle and the target missile were successful. In addition, the radars that track the target worked as planned, which is important because radar failure was the reason the last test of the system in January failed.

And Lehner pointed out that three tests prior to this year's two failures were successful.

"If it seems to some like the (Department of Defense) has been testing these interceptors for a long time, it has," said John Pike, president of GlobalSecurity.org. Wednesday's failed test was a "great-grandchild of the Homing Overlay Experiment that was initiated in the Carter administration and had four tests under Reagan, one of which worked."

The current generation of interceptors predates this century. "The first test was in 1999," Ellison said.

The age of the program may, according to Pike, also be why the test failed. "After five years, the electronics on these things are obsolete."

Despite the costs, more testing may be the solution. "Part of what's going on here is that they are just not testing it very often," Pike said. "People forget what they are doing. And so you have stupid mistakes."

Gen. James Cartwright, vice chairman of the Joint Chiefs of Staff, was asked if the test failure worried him.

"No, I'm not worried," Cartwright told reporters at the Pentagon. "The question now is, make sure we understand, was it two failures that were of the same ilk or was it two very different failures; that takes on different directions. We just don't know those answers yet."

Cartwright said the system already deployed is an older version that has proven effective in tests.

"We'd like to have this capability because it gives us some things that we didn't have in the older version," he said.

Lehner says a failure review investigation has been started to find out what went wrong. Once that is complete, and it could take months, the next test launch will be scheduled.