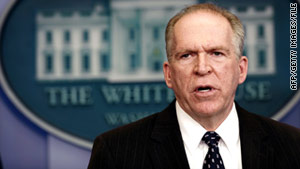 Washington (CNN) -- The administration's top counterterrorism adviser said Friday that the al Qaeda group based in Yemen poses a greater threat to Americans than Osama bin Laden's group based in Pakistan.

John Brennan, assistant to the president for homeland security and counterterrorism, said the Yemen-based group, al Qaeda in the Arabian Peninsula, is "increasingly active" in reaching out to find terrorist recruits, even in the United States.

"Al Qaeda in the Arabian Peninsula is now the most operationally active node of the al Qaeda network," Brennan said during a forum at the Carnegie Endowment for International Peace.

"The ranks of al Qaeda have been bolstered by members with ties to the West, or with American citizenship, such as Anwar al-Awlaki," he said. "Indeed, al Qaeda is seeking to attract not just Westerners or Americans overseas, but Americans inside the United States."

Al-Awlaki is the American-born Muslim who moved to Yemen and has become a key figure in AQAP. He has been linked to the suspect in the Fort Hood massacre of 13 people last year, as well as the suspect in last year's Christmas Day "underwear bombing" attempt in which a man allegedly tried to detonate an explosive device sewn into his underwear as his flight headed toward Detroit.

Brennan's remarks came a day after the release of the annual Afghanistan/Pakistan review and President Barack Obama's outline of his view of the threat posed by al Qaeda from its Pakistan base.

"It will take time to ultimately defeat al Qaeda, and it remains a ruthless and resilient enemy bent on attacking our country," Obama said Thursday.

But it's been al Qaeda in the Arabian Peninsula that has been behind most recent terror plots inside the United States.

Yemen tightened security at all of its airports last month in the aftermath of a plot to send bombs from Yemen to the United States hidden inside printer parts, the country's National Civil Aviation Security Committee said. AQAP claimed responsibility for the failed bomb plots.

America's top ally in the battle against AQAP is the central government of Yemen. Brennan described his meetings with Yemeni President Ali Abdullah Saleh as "animated."

Last winter, the U.S. Department of Defense announced plans to boost the military aid it is sending Yemen from $70 million to $150 million. And a recently leaked diplomatic cable showed Yemen's president was willing to deceive the public about air strikes against al Qaeda sites.

"Saleh lamented the use of cruise missiles that are "not very accurate" and welcomed the use of aircraft-deployed precision-guided bombs instead. 'We'll continue saying the bombs are ours, not yours,' Saleh said," according to the leaked cable from January of this year.

Despite this incident, Brennan said, "the relationship between Washington and Sanaa (Yeman's capital) is, at times, marked by differences of view, tension, and even strong frustration by each side."