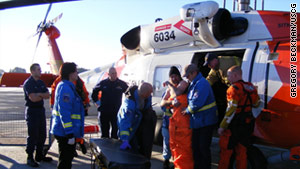 Crew members made a radio call for help about 10 a.m. Saturday, notifying authorities that the 34-foot Sandy M was taking on water and they planned to abandon ship.

Amid heavy winds and choppy seas, the rescue helicopter arrived at 10:40 a.m. and hoisted three crew members from a life raft and two from the water, the Coast Guard said in a statement. Emergency medical teams were waiting for them onshore in Sitka, Alaska.

The rescue took place near Whitney Island, Alaska, when winds were reportedly 40 mph and waves were between 6 and 8 feet, the statement said.

Medical personnel assessed all five of the crew members and released them in good condition, the Coast Guard said.