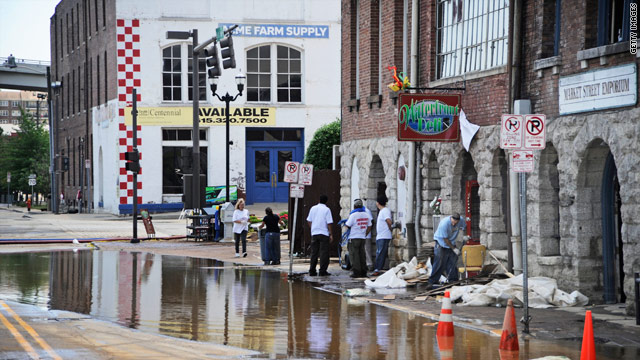 Nashville, Tennessee (CNN) -- Water continued to recede in flood-struck Tennessee Thursday, as the Cumberland River fell below flood stage for the first time since heavy weekend rains overflowed it.

As of Thursday afternoon, the river stood at 39.5 feet, or about half an inch under flood stage, officials said.

The waters had receded in much of the city of Nashville, six days after the record-setting rains swelled rivers to historic levels and flooded several neighborhoods.

Nashville's major business and government district, Metro Center, partially reopened at noon Thursday. Business owners and workers were allowed access to their properties at Metro Center, but the area remained closed to the public.

Other parts of downtown were also reopened Thursday to residents and shop owners, the Nashville mayor's office said.

The death toll in three states has risen to 31 from the storms, authorities said Thursday.

Has the Tennessee flooding affected you? Share your story, images

Twenty-one people have died in hard-hit Tennessee, authorities said. One person died in a tornado in Hardeman County that was spawned by heavy storms, according to the Tennessee Emergency Management Agency.

The death toll could rise as rescue crews continue to search for several people who have been reported missing, including two kayakers in Kentucky and several people in Tennessee, officials said.

Latest updates on the flooding and aftermath

"Nashville has obviously been hard-hit, and it's a well-known city, but there are so many other counties in the state and areas ... that have been hit very hard as well," Gov. Phil Bredesen said from Nashville on Thursday morning.

"A lot of people who didn't have flood insurance, because they never thought floodwaters would ever come anywhere near their home, are really looking at a total loss of their home," he said. "It's very tough on a lot of people right now."

The flooding was one of the biggest responses FEMA has made under his leadership, Fugate said at a news conference Thursday.

He asked those affected by flooding to contact FEMA to verify damage and apply for federal aid, if possible, he said.

As the floods recede, Bredesen said, people are facing the damage.

"We're going to get through this," he said. "This is a very resilient state."

"We are coming out of this thing," Dean said. "This has been devastating, but right now we're going to be focused on getting our city back up and working. "

The iconic Country Music Hall of Fame is also expected to reopen before week's end.

Nashville "will remain Music City and we will go forward doing what we've been doing," Dean said.

The mayor estimated the flood damage to his city to easily top $1 billion.

One of the city's main water treatment plants remained closed because of the flooding Thursday, prompting the city to tell residents to put off washing dishes and limit toilet flushing.

"Citizens are using water at a greater rate than we can treat it and pump it out to the community," said Sonia Harvat of Nashville's water department.

See photos as the cleanup begins

"There is still a significant amount of inspection, repair and testing to accomplish before the plant can be placed back in service and operations evaluated," she said in an e-mail to CNN.

The city would be forced to rely on bottled water unless more people started conserving, officials said.

Bredesen warned residents to be wary of con artists looking to capitalize on the flood response.

Singer and Nashville resident Kenny Chesney flew home to check on his house.

The damage Chesney saw from the air while flying in was nothing compared to what he's seen on the ground, he said.

The road leading to Chesney's 40-acre waterfront property was under five feet of water, accessible only by a motor boat.

"I lost a lot but not near as much as a lot of people," he said.