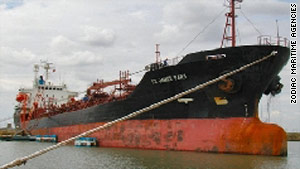 The St. James Park, pictured above, was captured earlier in the week off Somalia.

(CNN) -- Pirates off Somalia have hijacked two more vessels in the Gulf of Aden, the European Union naval force said Saturday -- the third and fourth vessels they have captured this week.

The British-flagged Asian Glory was seized off Somalia late Friday, the naval force said. The nationality of the pirates was unclear, because the hijacking happened outside of the force's operations area, it said.

The British Foreign Office would not confirm the hijacking, but said no British nationals were aboard.

The ship was heading toward Somalia after the hijacking, the naval force said.

The Asian Glory is owned by London-based Zodiac Maritime Agencies, according to Lloyd's Register of Ships. Zodiac also owns another vessel that was hijacked in the Gulf of Aden, the British-flagged chemical tanker St. James Park, according to the company's Web site.

The vessel had arrived at the Somali port of Hobyo, a pirate stronghold, the naval force said Saturday.

It had been heading for Thailand, but was on its way to the Somali coast after the hijacking, it said.