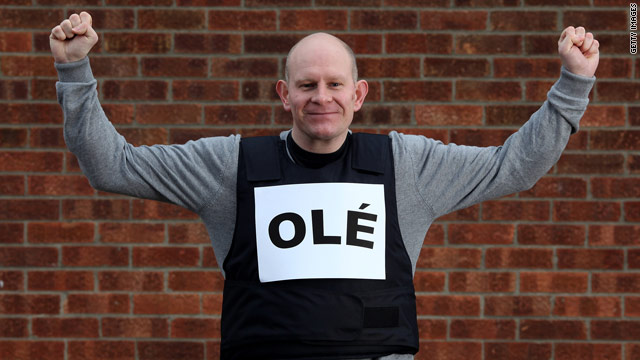 The company plans to sell the vests to fans attending this summer's African showpiece.
STORY HIGHLIGHTS

London, England (CNN) -- A London-based security clothing company has been blasted for marketing a "stab-proof vest" for football fans planning to visit this summer's World Cup in South Africa.

With as many as 50 South Africans in the nation of 49 million people killed daily, according to official government statistics, security has been a key issue for tournament organizers.

According to South African police figures there were 18,148 murders in the year ending March 2009 and knives or sharp objects were used in about 52 percent of the deaths.

But the figures -- which show 50 percent of killings were the result of arguments or misunderstandings and 16 percent the consequence of another crime -- do not identify how many tourists were killed.

"We have shown our ability to safeguard events," Danny Jordaan, the CEO of South Africa's World Cup organizing committee, told CNN recently. "In 140 events since 1994 we've not seen a single incident. You could draw up a list of countries with that kind of record and find very few."

"Being a huge football fan I was planning my own journey to South Africa and came across a lot negative stories from friends living in Johannesburg and from the media," said owner Sascha Cutura.

"There was a story where a security company representing the German football team recommended that the team wear bullet-proof vests when moving outside the camp. This got me thinking about a solution for all people who feel extra personal protection is needed."

For around $70 Protektorvest offers fans a customized vest featuring their team's national flag or a slogan such as "Free Hugs." They will even deliver it free of charge to hotel rooms in Johannesburg and Pretoria.

But Mark Perryman of the London England Fans supporters' group, which represents thousands of fans traveling to the South Africa, dismissed the idea as "reckless, irresponsible and ill-informed."

He told CNN: "There's just been a very successful South African tour by England's cricket team accompanied by thousands of supporters and I've not seen a single story about fans being murdered, stabbed or car-jacked.

"Around 35,000 rugby fans also went there last year to follow the British Lions and there were no serious stories there either.

"Of course there is going to be the odd incident at any major sporting event but why is South Africa being demonized like this when it has successfully hosted a rugby world cup and a cricket world cup?

"I live in London which has its fair share of crime but I would be up in arms if an American company, for example, advertised stab vests for visitors planning to attend the 2012 Olympic Games."

He added that England supporters' groups have sought to allay any fears fans traveling to South Africa for the first time may have. "We receive regular updates from tournament organizers about security and are keeping in regular contact with the British Embassy and numerous South African charities involved with the event.

"But let's not forget South Africa has a huge tourism industry. Millions travel there without fear. This is an example of someone trying to make money by playing on people's fears."

The head of the South African Football Assciation Kirsten Nematandani told the country's Times newspaper "it was 'unfortunate' some foreign businesses had a negative outlook on South Africa and the safety and security of travelling fans."

He added: "These people are out of order and should be condemned by their own country's officials. We've never heard of such measures being taken before and there surely is no need for it."