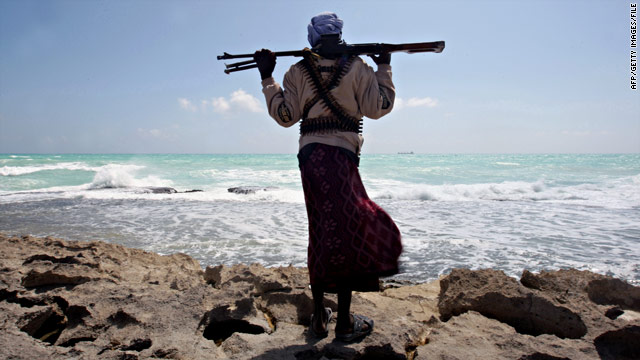 With the coast off Somalia a hub for piracy, at least three ships reportedly have been attacked in the area this year.
STORY HIGHLIGHTS
RELATED TOPICS

The ship, the MV Rim, changed course and is heading for the Somali Basin, the EU Naval Force said.

Two U.S. Navy ships working with NATO confirmed the hijacking, the USS Porter and a helicopter from the USS Farragut, the task force added.

The 4,800-ton ship is owned by Libya's White Sea Shipping. It is not clear how many crew members are on board or where they come from.

The attack comes two days after pirates released a Greek-owned vessel and its crew months after hijacking it off Somalia.

The MV Filitsa was released Monday after its owner paid a ransom, said Michael Battzoglou, a security officer and spokesman for the owner, Order Shipping Co. He did not say how much had been paid.

"All are well and safe," Battzoglou added.

The Greek coast guard also said no one had been killed or injured on the vessel.

The EU Naval Force confirmed the ransom had been paid and the ship freed. It did not say how much money changed hands.

The bulk carrier was hijacked November 11 off Somalia near the Seychelles, and was held at the pirate stronghold of Hobyo on the Somali coast, the EU said.

The coast off lawless Somalia has become a hub for piracy. At least three ships have been attacked in the region this year, according to the International Maritime Bureau, a nonprofit group that tracks and fights maritime crime and malpractice.

Pirates in the area hold nine ships with a total of 216 crew members, not including the MV Rim, said the bureau's Capt. Cyrus Mody.

The EU mission's main tasks include escorting merchant vessels carrying humanitarian aid for the World Food Program, protecting vulnerable ships in the Gulf of Aden and Indian Ocean, and deterring and disrupting piracy.