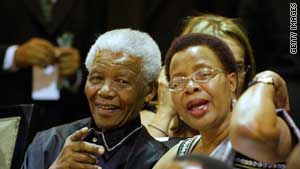 Nelson Mandela and his wife, Graca Machel, made a rare appearance Thursday as the nation's parliament honored him.
STORY HIGHLIGHTS

(CNN) -- Former South African freedom fighter-turned-president Nelson Mandela made a rare public appearance Thursday as the nation's parliament met to honor him on the 20th anniversary of his release from prison.

Mandela, 91, is known in the country as Madiba, his clan name. He and his wife, Graca Machel, were present to hear Zuma speak. His former wife, Winnie Mandela, also attended.

"We should reflect on how far we have traveled as a country," Zuma said. "Honorable members, we recall the words of Madiba on his release when he said, 'I stand before you not as a prophet, but as a humble servant of you, the people. Your tireless and heroic sacrifices have made it possible for me to be here today. I therefore place the remaining years of my life in your hands.'

"These words inspire us not to rest until we achieve the ideals of a society free of poverty and deprivation. In the two decades since the release of Madiba, our country has changed fundamentally."

Mandela was already in prison when he was convicted of treason in 1964 and given a life sentence. He was a living symbol of the struggle against South Africa's racist apartheid system, enacted when he was 30 years old.

Mandela was imprisoned for 27 years for opposing South Africa's government, which enforced its strict segregation laws through brutality. Following his release, he worked with South Africa's white president, F.W. de Klerk, to end those policies. De Klerk also was in attendance Thursday.

The African National Congress -- once again legal after being banned in 1961 -- elected Mandela as its president, and he won South Africa's presidential election in a landslide in 1994, the country's first black president.

In his last public words before he was jailed, Mandela said, "I have fought against white domination, and I have fought against black domination. I have cherished the ideal of a democratic and free society in which all persons will live together in harmony, and with equal opportunities. It is an ideal which I hope to live for, and to see realized. But if need be, it is an ideal for which I am prepared to die."

Zuma said Thursday, "As we celebrate Madiba's release today, let us recommit ourselves to building a better future for all South Africans, black and white. Let us pursue the ideal for which Madiba has fought his entire life: The ideal of a democratic and free society in which all persons live together in harmony and with equal opportunities."

Mandela is not remembered simply for ending apartheid. He also was behind reconciliation, a painful and lengthy process that attempted to hold those responsible for the brutality accountable for their acts without alienating other white South Africans.

He also was instrumental in bringing soccer's World Cup to South Africa. It will be held there this year, six years after soccer's world body awarded the event.