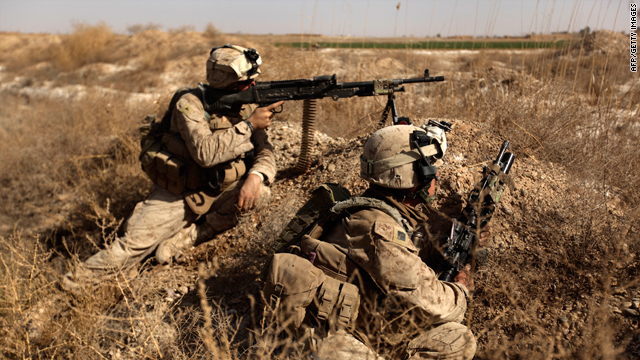 U.S. marines take cover from sniper fire in Trikh Nawar, a poppy farmland area on the outskirts of Marjah, on Thursday.
STORY HIGHLIGHTS

(CNN) -- As U.S., British, and Afghan troops move deeper into insurgent-infested areas of southern Afghanistan, one of the world's leading authorities on the Taliban said Thursday the offensive is likely to be the first of many coalition attacks this year and next.

"You will have to repeat this many times in the next year or 18 months all over the country, particularly in the south, but in the east you have to clear these provinces around Kabul, you have to push the Taliban back," Ahmed Rashid, a journalist and author of "Descent into Chaos" told CNN's Christiane Amanpour.

"The Taliban control most of the south and a lot of the east. They control some of the provinces. They have a very strong presence around Kabul, and I think that's where the next Western offensive will be."

The coalition offensive in and around Marjah in southern Helmand Province -- involving 15,000 soldiers and Marines -- is all about bringing governance to a critical area of Afghanistan, Rashid told Amanpour.

Video: 'Taliban not giving up'

"It is first of all the poppy area. It is the concentration of the Taliban. And it was also the supply route for logistics into Pakistan, where a lot of their recruits and logistics come from," he added.

"If you can settle that area, win the confidence of the people, certainly that would be a big blow" to the Taliban.

The British general in charge of the southern region of Afghanistan, Maj. Gen. Nick Carter, echoed the importance of bringing good governance to Helmand province.

"The fact of the matter is that in the 10 or 12 districts that really matter to us in the south, I think we can be confident that we are in support of the Afghan government, winning the argument about delivering better governance to that which the Taliban are delivering," Carter said.

But he warned it will take NATO-led military forces "another 25 to 30 days to secure that which needs to be secured" in Helmand, and a further three months to ensure insurgents are kept from the area.

As he was speaking, sources told CNN that at least one more Afghan Taliban leader has been seized in neighboring Pakistan by security forces.

The arrest comes on the heels of the apprehension in Karachi of the Taliban's number two figure, and overall military commander, Mullah Abdul Ghani Baradar, in a joint U.S. and Pakistani operation.

Rashid told Amanpour that the arrest of Baradar though could hinder efforts to reconcile with the Taliban. "Even if the Pakistanis want to use him now as a mediator, and they set him free, you've tainted him."

Rashid said Baradar is very close to the head of the Afghan Taliban, Mullah Mohammad Omar, and went to Saudi Arabia with his permission to participate in tentative talks about the possibility of reconciliation with the Afghan government.

Asked why the Pakistanis had agreed to arrest Baradar now, after years of U.S. pressure to take action, Rashid said the Pakistanis wanted to send a very firm message to the Taliban and to the Americans.

"If there's going to be any talks or dialogue between Kabul and the Taliban, Pakistan will have to be the main broker or mediator... you know, 'don't go into talks without telling us, because we (the Pakistanis) are the key players here.'"