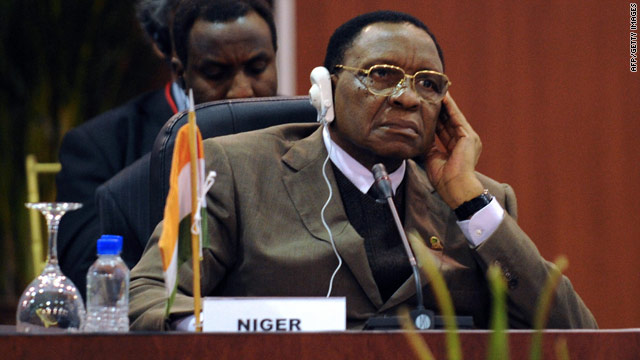 President Mamadou Tandja, shown in 2009, started his term in 1999 and wanted to stay beyond the constitution's mandated time.
STORY HIGHLIGHTS

(CNN) -- The French Foreign Ministry and a top African Union official have denounced a military coup in the west African nation of Niger.

The ministry said France "condemns all taking of power by nonconstitutional means" and calls on people in Niger "to show responsibility in the interest of the country," which gained its independence from France in 1960.

Jean Ping, the chairman of the 53-nation African Union, meanwhile, called for a quick return of "constitutional order" and said the organization is ready to help facilitate the process.

He said he had been following developments in the nation with concern after a Niger military official announced the constitution had been suspended.

President Mamadou Tandja is said to be detained in a military camp.

The violence may have been prompted by a collapse of talks between the government and the opposition over a recent referendum allowing the president to hold power indefinitely, according to the United Nations, which also called for a quick resolution.

"The children are going to school, the shops are open," he said.

A "demonstration of joy" in support of the military was held Friday afternoon, Doudacar said.

"The people are very happy," he said. "The coup ends a nine-month debate that blocked out all other subjects. We have gone through so many coups that it doesn't really affect us anymore."

"The chairperson of the commission stresses that the relevant AU instruments systematically condemn any unconstitutional change and, accordingly, he condemns the seizure of power by force that took place in Niger," said a statement from his office.

"The secretary-general has called on the stakeholders in Niger to swiftly revert to constitutional order in the settlement of the political crisis," said a statement from U.N. Secretary-General Ban Ki-moon.

Thursday's order to suspend the constitution was attributed to the Superior Council for the Restoration of Democracy. It also suspended all institutions, urged citizens to remain calm and called for support from the international community.

Dana Palade, a spokeswoman for World Vision, who is in the capital, Niamey, said gunfire rang out in the streets Thursday. The French Embassy also reported hearing intermittent gunfire near the palace.

Tensions have flared in Niger recently. Tandja, in office since December 1999, had been trying to stay in power beyond the time mandated by the constitution.

"That may well have been ... an act on his behalf that precipitated the act today," P.J. Crowley, assistant U.S. secretary of state, said Thursday.

The United States does not condone violence, but "clearly we think this underscores that Niger needs to move ahead with the elections and the formation of a new government," Crowley said.

Niger, one of the poorest countries in Africa, has about 8 percent of the world's uranium. It has had lucrative uranium contracts, particularly with China.

The west African nation has a population of about 15 million and lies between the Sahara Desert and Nigeria.